Behind the Design: Manufacturing the Leatherman Wave Multi-Tool

The Leatherman Wave was released back in 1996 and was the first Leatherman to feature accessible blades without opening the handle. People must have loved cutting things to ribbons because it became the company’s bestselling multi-tool ever. So it only made sense for BRANDMADE.TV, a documentary YouTube channel, to show how this iconic multi-tool gets made. 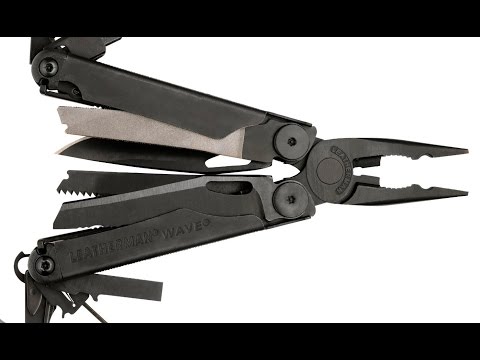 Starting with the handles, each of the Wave’s 17 tools is made separately by machines before being assembled by human hands. Consisting of screwdrivers, pliers, blades, and a small saw to name a few, each of the individual parts are heat-treated before being tumbled with ceramic beads to remove any rough edges and to polish them. Once hundreds of beads pulverize the parts during the bead blasting process, they are then finished individually.

Blades are sharpened using a double disc grinder, saws are side grinded, while scissor blades are individually made and sharpened before being flattened to the right thickness.

Keeping the Leatherman Wave together is a taper lock which holds the tools in place as they are being used. This helps them conform to the single tool they’re supposed to fit into and is core step in completing the assembly process.

Last to come are the iconic pliers, which are cast using a process called coining wherein the punch press exerts a ton of force on the metal to bend it into the desired shape. Once the metals are bent, they are sanded and polished before joining the rest of the Leatherman Wave parts for hand assembly.

The assembled Leatherman Wave is checked for consistency to make sure all of the tools are working as intended. Torque, tightness, and sharpness of the blades are tested before being sent out into the wild.

The still images don’t do the video justice, as seeing layers of sheet metal get turned into one of the world’s most durable multi-tools is awesome in its own right. You can find more behind-the-scenes videos on some of your favorite products on BRANDMADE.TV’s YouTube channel.