It’s no secret that Adam Savage is a big Nerf fan and incredibly fond of the company’s Rival Nemesis MXVII-10K 100-round assault weapon. As with any piece of equipment though, the Tested star is capable of taking it to the limit of what it can do, which is what he did with the Nemesis- transforming it from a 100-shot rifle to a 1000-round blaster with several upgrades for his popular One Day Builds. 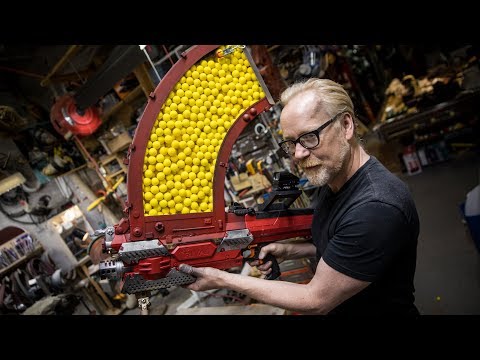 In order to fire a thousand rounds of plastic balls, Adam needed to design a clip that could hold them all, as the weapons original hopper had no chance of packing that many in a confined space. To build his massive clip, Adam created a foam-board mold to get an idea of how much volume was needed for the foam balls, and for getting a rough idea for the dimensions of the magazine.

Once the measurements were completed, Adam used the foam paneling as a template to cut acrylic panels that act as the magazine body. For the giant clip to fit the Nemesis, he had to trim some of the plastic on the receiver, which didn’t take away from its function. Once completed, Adam glue-welded all the acrylic pieces together, including the hopper and kitbashed it to make it look battle-worn.

After giving the gun an incredible paint job, Adam finished the build by adding on a bipod and red-dot sight to complete the build, which turned out really well, making it look like a weapon straight out of Warhammer 40K.

Be sure to check out the rest of Savage’s insane one-day builds over on the Tested YouTube channel.

Everyday Hacks You Can Do With Your Heat Gun

Hedgehog Hollow Shows How to Use Heat Gun in Craft-Making

Fun Things You Can Do With Heat Gun