In this day and age, a good number of the world’s population is already using 3D printing technology. From large manufacturing companies utilizing Selective Laser Sintering (SLS) to the more common Fused Deposition Modeling (FDM) found in commercial 3D printers, almost anyone with a couple of bucks to spare can buy and make use of their own 3D printer.

We all know how multiple types of 3D printers are used to create some amazing things, but have you ever wondered how the printers themselves are made?

You wouldn’t be wrong if you bet that 3D printer parts are made by individual machines around the world and assembled in a factory somewhere – much like how any commercial product is produced. But since 3D printing itself decreases the cost of manpower and resources, wouldn’t it be logical to 3D print a 3D printer?

As it turns out, it’s not that crazy as it sounds. Some companies have been using 3D printers to make their own 3D printers, much like how you would think plugging a transformer into itself would result in unlimited power (the only difference being 3D printing printers actually works). 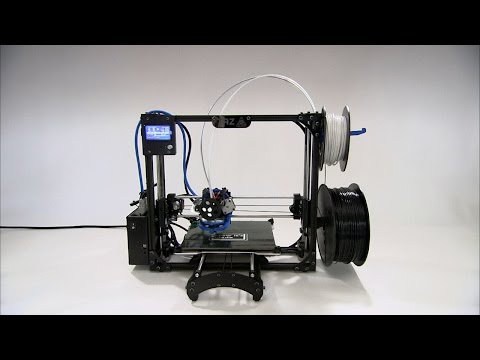 A few years ago, Science Channel paid a visit to a company that uses a ton of FDM 3D printers to make even more 3D printers. With the help of a few human hands to aid with assembly, you can see how 3D printing can be used to cut corners to create a well-made product.

Instead of outsourcing multiple companies to make customized printer parts, this company can make 40 parts in-house using their own files and 135 3D printers. It may take some time to produce all the parts needed, but this method is way cheaper.

While parts like the housing and gears can be 3D printed, harder components which need to be made from yet unprintable materials (such as metal rods, motors, glass, and wires) are produced or purchased elsewhere. These are then brought into the production line as they are needed.

Once the parts have been printed, flesh and blood human inspects each part for any defects before assembly. They then drill holes into specific parts, attach gears and motors, and make sure each part is in the right place for the 3D printer to work.

Gears and a motor are attached to the extruder body, whereupon the hot end (the part which heats up the filaments) is connected last. Combined, these make up the 3D printer tool head.

The frame of the 3D printer isn’t entirely printed either. Its main component is aluminum, which is held together by 3D-printed plastic parts. Two rods are placed horizontally to attach the tool head onto the frame while a rubber belt connected to a motor allows the tool head to move along the rods.

Below the tool head, the glass surfaced print bed is placed on a conveyor which aids with the 3D printing process. Finally, the electronics are connected to a power supply before everything is tightened down with screws.

Much like traditional manufacturing, 3D printing a 3D printer requires quality assurance – meaning the printer has to be tested before it can be shipped out. The filament is pushed through the tool head, where it prints a sample. This works similarly with two-tone printing, with the only difference being two filaments are pushed through a double extruder tool head.

If the printed sample is satisfactory, the 3D printer will be packaged.

What’s amazing about this is how self-replicating 3D printing can be. Sure, you still need manpower and a few outsourced, unprintable parts, but the majority of the parts are made using the same process they will end up doing themselves. Seeing as 3D printing is still very much in its infancy, imagine what we will be able to achieve in 10 years’ time!