An anonymous puzzle maker has made history by building the world’s largest twisty puzzle in the world with a 22×22 Rubik’s cube. The designer failed twice when previous designs exploded, but due to dogged determination the mysterious designer has finally succeeded.

We all witnessed the devastating destruction of one puzzle maker’s attempt at building the largest Rubik’s cube in the world. Despite having destroyed two models on live stream, the anonymous puzzle creator has finally succeeded in creating the world’s largest twisty puzzle last week.

The massive puzzle is a 22×22 Rubik’s cube. It is currently the highest order end-by-end twisty puzzle in existence and it only took the developer 8 months of humiliating himself live online to make his dream a reality (no really, if you haven’t seen his previous design failures, you’ll want to check them out. It’s heartbreaking).

The puzzle has an edge length of 200mm with an unbelievable 2,691 pieces. Each piece was printed using the lowest grade consumer FMD 3D printer, and connects using a cylindrical floating anchor design inspired by famous puzzle maker Oskar van Deventer. The puzzle also features 4.3 x 10^1795 possible scrambles, with only one correct solution. Good luck successfully completing that tasks, although the current 14-year-old world record holder might have a shot.

The anonymous puzzle maker said he created the puzzle to push the limits of 3D printing. He said the successful completion of the puzzle showcases how far 3D printing has come. When asked what kind of advice he would give himself if he had to go back and recreate the puzzle, he said he would mark the pieces to better tell them apart… you know… in case of another explosion.

It’s pretty clear in the final video feature, he also recommends building a very, very, very strong base. Check out Coren Puzzle on YouTube for all things puzzle related, and if you’re feeling inspired, you can’t print and construct it yourself or try topping this guy’s puzzle. Anyone for a 44×44 Rubik’s cube? I know this… frustration will bring a hammer to this beauty, eventually. 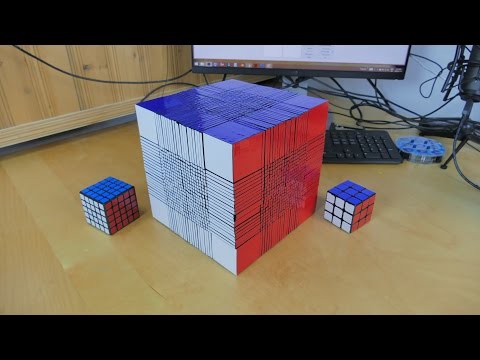 SolidWorks xDesign, Innovation Platform and What It All Means