If you’re too busy living on planet Earth to bother with the rest of intergalactic space, you might be surprised at the sudden loss of sunlight August 21. The 2017 solar eclipse will cover the entire contiguous United States and will be the first one to hit the country since June 8, 1918.

To prepare for this once-in-a-lifetime event, why not make your own do-it-yourself sun viewer? While your neighbors will no doubt whip out their digital cameras and video capture equipment, what they’ll be seeing is a tiny blotted out dot of sunlight.

“Even an eleven-year-old can make a sun viewer”, says YouTuber CodyDon on his channel, Cody’s Lab. Using a combination of empty Pringles cans, Dixie cups, duct tape, plastic, a magnifying glass, and a push pin, Cody is able to create a more viable way to see the upcoming eclipse. 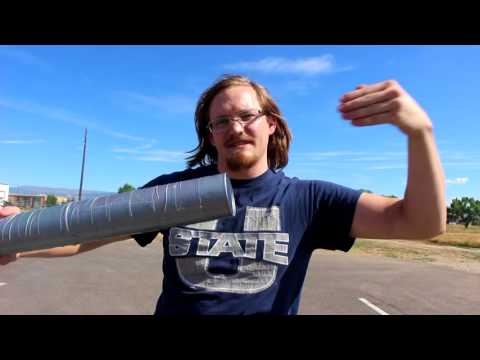 He starts off by puncturing a hole into the center of the base of one of the Pringles cans. This provides a space for the sunlight to come through. To increase the image seen through the hole, Cody duct tapes a baseless Pringles can to the initial one.

Unless you plan on spending the rest of your life blind, you will want to put a plastic screen on your sun viewer. This is easily accomplished by cutting off a portion of the baseless Pringles can and wrapping it in plastic.

After duct taping it backwards to the rest of the sun viewer, you now have an apparatus which lets you see the sun without burning out your retinas.

This is likely the most delicious-smelling sun viewer you will ever make. To compliment the smell of Pringles, Cody adds a couple of baseless Dixie cups which will increase the size of the viewfinder to fit the magnifying glass.

Finally, tape the magnifying lens to the apparatus and you’re ready to go! To make it look more professional and mask the fact that you’re actually looking at the sun through a couple of taped Pringles cans, Cody advises duct taping the rest of the sun viewer.

Thanks to the length of the cans, the image of the sun is bigger than the beads of sweat you excreted while making the sun viewer. The magnifying glass isn’t really necessary, but it helps make what you see through the sun viewer a little bit larger.

You can find more of Cody’s creations over at Cody’s Lab, his YouTube channel.