Some products come in different variants to serve specific purposes. The same goes for glasses.

Glass is one product that has many variants. You have your traditional glass panes which don’t have anything mixed in with them. You have tempered glass – commonly found on car windshields – which is easy to crush but hard to shatter. There is bulletproof glass – made from a combination of hard and soft glass. And then there’s fireproof glass, which is heat-resistant tempered.

Those are just a few of the many glass variants out there. But how do they stack up against something volatile? Something natural? Something like… lava?! 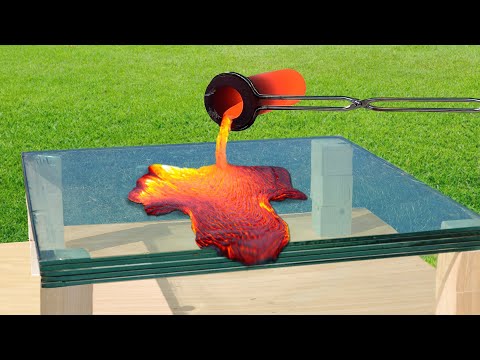 YouTube channel Superkot just happened to have some extra volcanic rock lying around one day. Eager to put it to good use, they fired up their smelter, melted the rock into lava, and pitted various types of glass against it.

The results of the experiments are more than a little interesting:

In order to make the normal glass pane experiment more interesting, Superkot decided to stack 3 panes vertically with even spacing between them.

As soon as the lava touched the glass, it shattered into multiple pieces. This allowed the lava to flow down onto the next glass pane, which fared just as well as its predecessor. It only took a couple of seconds and a small amount of lava to shatter and break all of the normal glass panes.

After some time passed, they were able to recover the lava that was poured onto the glass. It became a lot darker after cooling down and managed to capture some glass shards with it, as well.

Fire-resistant glass is special in that it is made from multiple layers of special tempered glass. Between these layers lie pockets of fire-resistant gel which expand when the temperature around it gets too hot. The gel becomes non-transparent and prevents the spread of fire throughout the rest of the glass.

But enough explanation! It’s better to see it in action!

Pouring hot lava over the fire-resistant glass automatically caused the gel inside to expand. You can see the white opaque gel appear under the lava and spread across the glass. Just as everyone thought it was over, the lava popped right off – leaving cracks on the glass and a large chunk of molten rock lying atop it.

Despite the sudden reaction, the fire-resistant glass didn’t develop any holes. There were countless cracks from when the lava took a skip and jump, but the heat seemed to have only burned through to the gel portion of the glass. If you’re living beside an active volcano, then fire-resistant windows seem to be the way to go!

After seeing such a strong glass stand up to one of the worst things Mother Nature can throw at you, watching lava burn through a car glass pane seems kind of underwhelming.

While not as instant as the normal glass panes, the lava burned through the car glass with enough time and patience. This time, however, the car glass was destroyed with some sort of a pattern, as opposed to the concentrated shattered spot at the center of the regular glass panes.

When the dust settled, the presence of the molten rock at the center of the shattered car glass was highlighted. The glass that was used seemed to have given the lava a wide berth, as if it didn’t want anything to do with it. And honestly, who would?

The final experiment should be much more interesting than the previous one. As I mentioned earlier, bulletproof glass is usually made by combining a hard glass and a soft one.

It’s pretty easy to understand the use of the hard layer – it’s meant to stop fast-moving projectiles like bullets, after all. But the soft layer is just as important. It gives the glass elastic properties, allowing it to flex instead to shatter from impacts.

Seeing the lava being poured onto the bulletproof glass, you see this elasticity in action. The bulletproof glass didn’t pop as much as the other glass variants. Instead, the foreign material (the lava) caused cracks to spider across the glass. It melted through the area it made contact with but after letting it settle, you can see the glass had barely been burned through.

So there you have it. If you happen to live on the Pacific Ring of Fire where volcanic eruptions usually occur, it seems best to dress your home, car, and office with either fire-resistant or bulletproof windows. The former will keep you safe from pouring lava while the latter will protect you from fire-infused projectiles!