It’s one of those myths only people who transport heavy loads will know about. According to rumor, if you twist a ratchet strap by even a little, you are effectively reducing its load capacity by 50%.

While it is true that adding a twist to a taut ratchet strap reduces the slack and tension, there haven’t been some tests regarding the load capacity. That’s exactly why Jason from Fireball Tool decided to test out a bunch of different tying styles on multiple ratchet straps to see if there is any truth to the myth: 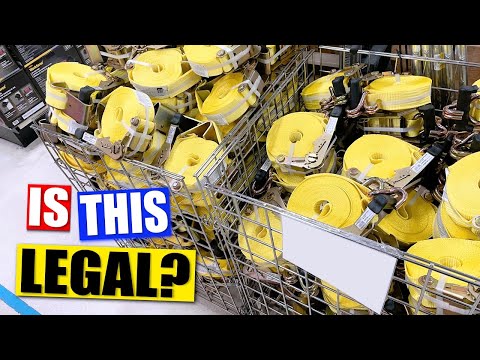 To simulate a moving vehicle under stress, Jason welded an air jack onto a large, rectangular piece of plate steel. With two hinges on either side of the plate and a round metal plate on the tip of the jack, Jason pushed the straps to their breaking point.

Starting with an unknotted and untwisted strap as the control test, he used a digital force gauge to determine that the normal amount of force a ratchet strap can provide with just the handle is 655 kg (or 1,461 lbs). But that’s just with a taut ratchet strap. To get the exact amount of force the strap can handle before breaking, they have to… well, break it.

And that’s just what Jason did. With enough force from the air jack, the ratchet strap snapped at the spool – heating up the strap and sending fibers airborne. Jason took a look at the footage and discovered the breaking point of an untwisted, unknotted 2-inch ratchet strap was 4,279 kg of force (9,433 lbs). Not bad, considering the working limit for the ratchet straps were advertised to be 1,512 kg (3,333 lbs).

With the control points measured, Jason started adding different numbers of twists to the succeeding ratchet straps. A single twist in the strap yielded a snap at 4,375 kg (9,645lbs) – a little higher than an untwisted ratchet strap.

Increasing the number of twists past one seemed to inversely affect the load capacity, however. Four twists led to the strap snapping at 4,205 kg (9,270 lbs), while 10 twists resulted in an even earlier breakage at 3492 kg (7,698 lbs). It isn’t quite as drastic as a 50% load capacity decrease, so the rumors about twists dramatically reducing load capacity seem to be greatly exaggerated.

Not to be discouraged by the results, Jason tried adding a knot to the next strap. This time, the strap broke at the knot instead of the spool. And wouldn’t you know it, it snapped at 1630 kg (3,593 lbs) – 50% lower than the load capacity of the untwisted, unknotted control test.

So maybe the rumors were true – but only for the knotted strap!

Lastly, Jason tried to see if a wet ratchet strap would affect its load capacity. He submerged the final strap in water for a while before subjecting it to the air jack and letting it fly. A snap at 4013 kg (8,847 lbs) of force is a slight reduction from the load capacity of the dry strap, but it isn’t that bad when compared to the ones with twists and knots.

Moral of the story: Do not, under any circumstances, put a knot in your ratchet straps. A couple of twists to reduce the vibrations are alright, but overdoing it could result in the strap snapping and your cargo flying overboard.