Driving with an automatic transmission is like driving on easy mode. With the removal of the clutch pedal and the need to constantly switch gears, all the driver needs to do is basically point the car where it needs to go and step on the gas.

But what makes driving an automatic transmission so easy? This what the Youtuber known as “speedkar99” is going to find out as he disassembles an automatic shifter. 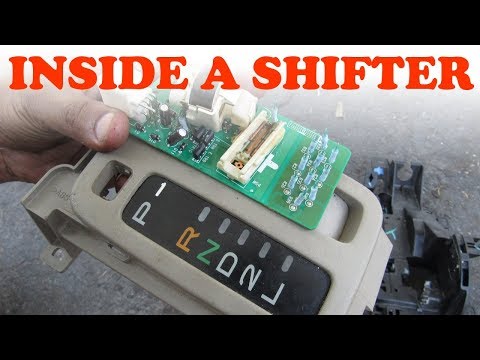 The purpose of an automatic shifter is to allow the driver to safely shift between driving modes without accidentally switching to the wrong gear. It is composed of an engine control unit (ECU) which connects to the brake lights and key ignition, a shifter that allows you to switch between driving modes, and a cable which goes directly to the engine transmission.

With the shifter disconnected from the rest of the car, you can see its primary focus is the giant shift button. This is the button you are most familiar with as it allows you to switch between your car’s gears and out of the parking space. The lower button which you never touch is your overdrive button. It allows your car to run at a sustained speed with a lower RPM, reducing wear and fuel consumption.

Those are the easiest pieces to describe; now onto the shift assembly itself.

The assembly is composed of two important interlock mechanisms which prevent your shifter from suddenly changing gears. The first mechanism requires for the brakes to be depressed, the key in the ignition, and the shift button to be pressed before allowing the driver to switch gears. This means the driver has to purposefully complete these steps for the car to actually go anywhere.

The second locking mechanism keeps the lever from accidentally transitioning to a different gear. Unless the shift button is pressed, a black tab keeps the lever locked in place. In conjunction with the first safety mechanism, you cannot interact with anything unless the key is in the ignition and the brakes are depressed. But even if the battery dies, there is a shift lock release button to switch the car out of its park position and move it elsewhere.

The electrical component of the shifter is the ECU. Using a special circuit board and solenoid, the ECU takes the position of your lever, buttons, brakes, and key ignition into consideration when determining what actions you can or cannot do.

Last but not least is the specialized teeth profile housed in the shifter. While one side of the shift lever’s pin is connected to the shift lock mechanism, the other side fits into the various grooves which determine which gear you are in and if you need to press the shift button to switch to a specific gear.

These are all the parts that make up an automatic shifter. While nowhere near as complicated (or as reliable) as the insides of a manual transmission, the components feature both mechanical and electrical parts.

If you want to learn more about your car than simply making it work, you can check out more of speedkar99’s videos on his YouTube channel.