Considered by many to be the first consumer robot, iRobot’s Roomba Vacuum Cleaning Robot has sold over 10 million units since it was introduced in 2002. Yesterday, iRobot announced that those who have come to rely on automated vacuum cleaning will now be able to rely on automated robotic lawn mowing af ter they were given technical clearance by U.S. regulators.

The biggest hurdle for the Bedford, Massachusetts-based company was getting clearance from the Federal Communications Commission (FCC) to make sure that transmissions between its machines and the antennas wouldn’t interfere with other devices using the same frequencies. Currently, the company’s competitors rely on complex underground wiring networks and other setups that most homeowners aren’t likely to have – in contrast, their own offering is aimed at being a plug n’ play option that relies on wireless beacons.

But since the low-power radio signals from the beacons can interfere with existing outdoor infrastructures – such as the pre-existing network of telescopes from the National Radio Astronomy Observatory – the FCC prohibited the use of such “fixed outdoor infrastructures” without obtaining a proper license – a category that the iRobot lawn mower’s beacon fell into. However, the company was able to gain clearance after proving that their beacon design and radio signals wouldn’t interfere with the existing infrastructures.

“The FCC’s assessment agrees with our analysis that the technology will not have a negative impact on (existing infrastructures such as) radio astronomy,” said an iRobot spokesman.

“The FCC’s decision will allow iRobot to continue exploring the viability of wideband, alongside other technologies, as part of a long-term product exploration effort in the lawn mowing category.” 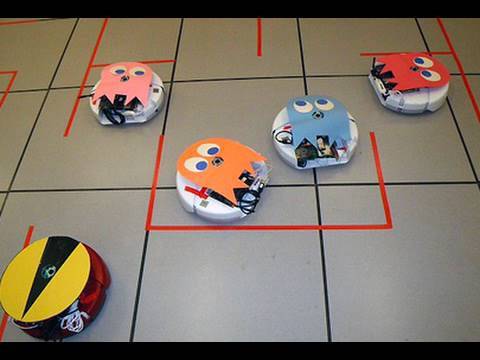 When considering that the existing vacuum cleaning Roomba has become one of the most favored hackable robots in the hacking community, one can only wonder what users of the Roomba Open Interface – an interface which allows users to take control of the robot’s sensors, movements and behavior – will come up with now that they can get their hands on an outdoor-friendly robot … of course, aside from watching their lawn get trimmed while enjoying a martini in the shade.

Best Canister Vacuums for Home Use