Few examples of product packaging have had an upcycling history quite like the iconic Altoids Tin. From wallets and first aid kits to even a mini bbq stove, the applications people have come up with for repurposing the cheap tin containers are as wide-ranging as they are ingenious.

And in the age of DIY electronic hacking, it’s only natural that the latest comes in the form of a portable video game system. 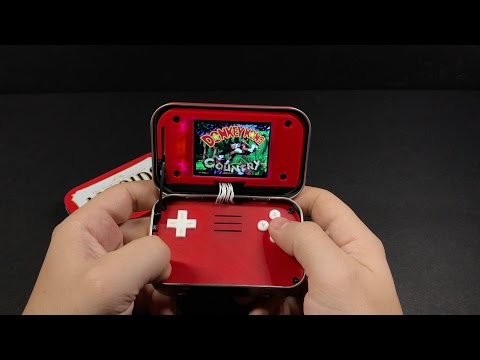 “I’ve been working on a much-improved version of the mintyPi project I showed off a while back,” explains sudomod. “It uses 3D-printed parts to drastically improve the look and comfort of it, so it’s actually something you wouldn’t mind sticking in your pocket and playing games on.”

Specific updates from the first version to the second version include an integrated hinge to hold the screen up while playing, a larger and crisper display, and USB sound rather than PWM audio.

Utilizing a gaming emulator for the Raspberry Pi that lets users play retro video games, sudomod has essentially bundled a popular Raspberry Pi project into a tiny little box that was previously housed by mints.

For those interested in building their own mintyPi 2.0, sudomod will be releasing build plans on his website in the coming weeks.

SolidSmack Radio | Those Harsh Rays (Bring It On)