If you like to watch things roll, and build things to make them roll, these beautiful, modular marble runs were made just for you.

Invented by entrepreneur Walter Mason, these wooden marble runs work similarly to many a Rube Goldberg machine–you’ll recall the one in the OK Go music video, yes?–albeit not as complex and much less of a whatever-is-laying-in-the-garage approach. Walter’s kickstarted another marble run project six years ago, but now he is launching (and has successfully funded) two wooden kits you can assemble in the confines of your own home. 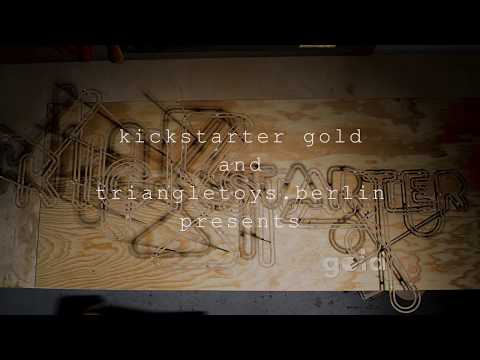 The “boa” set is the smaller of the two and uses everyday ping pong balls as its ammunition, while the “anaconda” set is far wider and requires 4-inch hollow steel balls (or anything similarly-sized) to be put on its tracks. Both sets come in lengths of 20 and 40 meters, so it really comes down to how much free space you have in your house or backyard.

The sets are made for easy assembly, crafted on Mason’s CNC machine. The runs don’t require any heavy duty tools to put together, either. You simply pop on the tracks, suspend them with the included steel wire, and watch gravity do its job.

In our wonderfully digital world, we’re so easily distracted–when we aren’t online, we’re fiddling with a fidget spinner, when we’re not doing that, we’re back watching cat videos. I think we all would prefer the distraction of building a massive marble run though.

Like a wooden train track set, there isn’t a specific way in to set the tracks; you can adjust the tracks to the surroundings and your own creative needs. All the sets are designed to build a run 20 meters (65 feet) in length, with the Large Anaconda Kickstarter Gold edition built for a 40 meter (131 foot) installation.

The Kickstarter Gold project for the two marble sets has already reached its €10,000 ($11,633 USD) goal, and the two sizes are available at various price points starting at €120 ($140 USD),  but if you just want to see more videos of slow rolling ping-pong and steel ball set to soothing music, head over to Walter Mason’s YouTube channel.