If you’ve never been across the pond, then you have probably never seen of The ArcelorMittal Orbit. Looking like a sort of towering behemoth from an H.P. Lovecraft story, the ArcelorMittal Orbit is a 376 foot sculpture and observation tower in Queen Elizabeth Olympic Park in Stratford, London. At 115 meters (22 meters taller than the Statue of Liberty), it’s the largest piece of public art in Great Britain and was erected to represent the lasting legacy of the 2012 Summer Olympic and Paralympic Games. The sculpture is already breathtaking in itself, but now the piece is about to get even more amazing. It’s getting a slide.

BEHOLD. The human blender. Forget everything you knew about slides from your days at the playground. This helter skelter style slide is called ‘The Slide’, and at 178 m-long (584 ft), is unlike anything you’ve ever seen. First, it will be the world’s longest tunnel slide. Second, it’s made up of 30 sections, featuring 12 turns anda corkscrew twist. Third, it has a top speed of 15 miles per hour taking, delivering you to the base in 40 seconds flat. Fourth, you’ll slide down the 60cm (~24″) diameter tube on a 3mm wall of sheet steel. It’s certainly a feat of engineering and the artist responsible for an acrophobia’s nightmare is Carsten Höller. Höller accepted an invitation from Sir Anish Kappor, designer of ArcelorMitter Orbit, to begin the project last year.

Höller has actually built a number of slides since 1999, including the Test Site Slide in the Tate Modern Turbine Hall. But this is the first time he’s built a slide on top of a piece of art. “I really like the dirtiness of it and the confusion it creates,” says Höller. “That you don’t really know what it is, but that it truly creates a unique experience.” 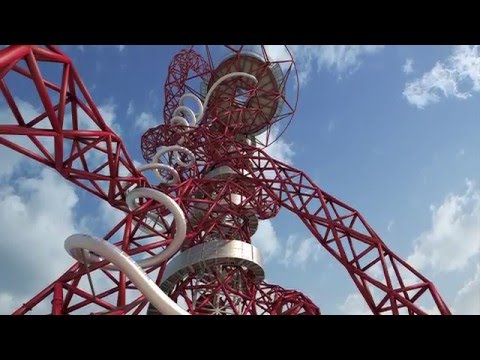 Höller wants people to view the slide as two spirals coming together. It does give that effect, with the resemblance of a DNA model that’s been completely jacked-up.  Can you imagine if you get some water on this bad boy? Maybe his next installation will be a slide around the Burj Khalifa down to the lake below.

A video posted by Queen Elizabeth Park shows a group of workers building and welding pieces of the slide individually. The main body of the slide was built by Wiegand, the world’s leading slide manufacturer, so you can expect a high quality ride for this breathtaking slide.

The Slide attraction officially opens June 24th, 2016. Tickets cost £15 ($22) and includes access to the Orbit’s viewing platform. If you live in London, start making plans to visit The Slide. If not, start getting your plane tickets and reserving your hotels to experience this amazing slide and brag about it to your friends on the Twitters.