For those of you don’t play video games, Overwatch is a highly addictive first person shooter that pits two teams composed of six characters each against each other. From a mild-mannered robot to a talking gorilla, the game took the world by storm with its unique character roster and cartoony art style which anybody with a love for Pixar films can appreciate.

It comes as no surprise then why a lot of fans love to cosplay as their favorite heroes. Mike Carambat doesn’t have a physical medal, but he definitely just became his daughter’s favorite person in the world when he created this walking, talking D.Va MEKA for her.

Presently the youngest playable hero of the game, D.Va, is one of the harder characters to cosplay. While her skintight pilot suit isn’t difficult to recreate, it’s her iconic pink MEKA which sets the part-time cosplayers apart from the hardcore fans.

Mike starts by constructing a wooden skeleton on top of an old electric wheelchair and builds everything from there. As the MEKA moves, a simple bicycle pedal connected to the motor rotates the legs, giving the illusion that the person inside is actually walking and isn’t uncomfortably squatted forward. He completes the legs by crafting some hydraulic heels out of a tripod shaft.

The torso provides the steering and houses some pretty neat features. Disco lighting helps show the interior of the MEKA and comes in handy just in case the 80s ever decide to come back. A 120watt stereo system plays D.Va’s voice lines and helps drown out the noise from the thrusters at the back. There’s even a built-in cooling system that keeps the pilot comfortable during those sweaty cosplay conventions! 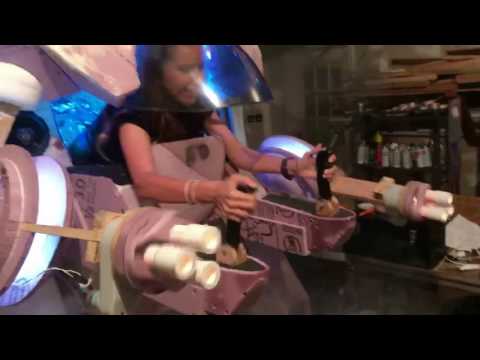 But the best part of the MEKA has got to be its arms. Not only do they rotate and light up when fired, they can also be controlled via the two pilot sticks the user operates. Now this may not be such a big feat in terms of robotics, but in the world of cosplay, this is definitely a step up from wearing fancy makeup and holding a gigantic cardboard sword.

All that’s left is to add the iconic pink paint job and it’s ready to go! His daughter recently used the MEKA at Mecha Con and will feature it again at the upcoming Dragon Con this September in Atlanta. You can see the design process for the MEKA over at Mike’s YouTubechannel or on Instagram.