Most folks can probably agree that it has been fun watching the progression of affordable domestic robots evolve in the post-millennium era. Undoubtedly, it is becoming increasingly conventional to employ automated machines to facilitate routine tasks that would have been manual ones not ten years ago. However, it is still fairly uncommon to find free-range robotic devices in the home-setting, aside from the occasional iRobot Roomba. But as we all know, other domestic robots are certainly out there—it is mostly a matter of balancing their practicality with their price points that is preventing them from gaining a greater footing in the household environment. 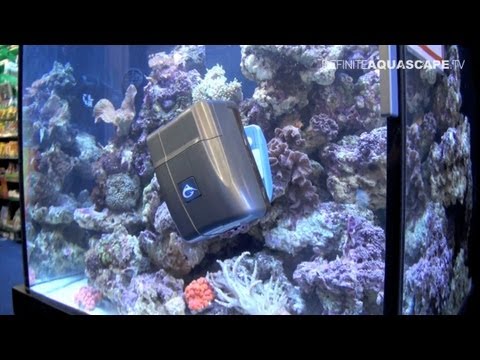 One of the funkier robots that I have come across recently is the RoboSnail from AquaGenesis. Like many affordable consumer robots, the RoboSnail is designed to do just one simple task: removing the algae from the inside wall of your fish tank. At $299 dollars, it is certainly an investment, but having been designed for aquariums 55-150 gallons in size, it might be a worthy one considering the costs and hassles that many aquarists have come to know all-too-well in maintaining their setups.

The construction of the RoboSnail is pretty simple—the actual robot itself is a two-part mechanism, the guts and motors of which remain in a chassis on the outside of the tank, while the cleaning mechanism is on the inside, bound to the external component by magnets. The device stays on the tank vertically and, like many newer floor-cleaning robots, it returns to its externally-mounted charging station at the end of each cleaning cycle.

The RoboSnail programs itself using basic geometry and trig to calculate the size and shape of your tank, as well as its best course-of-action plan for cleaning it. The device features a single programming button which tells the bot to calibrate, and the same button can also be used to tell it to function manually. Typically, the RoboSnail is intended to function as a set-it-and-leave-it machine, going about its routine once-daily, on a twenty-four-hour cycle.

The cleaning pad in the RoboSnail is built for longevity and is easy to remove from the submerged cleaning mechanism. It is easily-washable and does not require special maintenance or chemical treatment—which is great because it is always a pain when you have to maintain products that are designed reduce preventative maintenance (ie: buying filters for bag-less canister vacuums…grrrr).

The RoboSnail is compatible with most freestanding, wall-mounted and rimless aquariums with 6-10 mm walls (standard), so it is pretty versatile, as it should be. The major down-side of the device seems to be that it is not capable of cleaning more than the wall that it is mounted-on, and it is currently unclear if AquaGenesis is planning on developing an updated model which will be able to traverse 90-degree corners. Nevertheless, it could still be a very handy contraption to the avid aquarist. The RoboSnail is available from Aquarium Specialty and other online retailers.

(All images via AquaGenesis International)

SolidSmack Radio | The Fox in the Snow