A little over a year ago, Mokacam introduced a tiny 4K camera of the same name on Indiegogo where it was successfully crowd-funded several times over before it even got near the end date. With that much success, Mokacam is back for round two with a second, smaller version of the 4K camera, aptly named Alpha, and once again, they’ve already surpassed their target goal of $25K with over three weeks left to go.

Actually, Makocam is introducing two new cameras–the Alpha and the Alpha S. Both are nearly identical except for a few features (more on that in a bit). There have also been a number of upgrades since the first iteration of the camera was introduced a year ago, including a new tilt-screen and the ability to change the shutter speed via a rotating wheel, which can be adjusted from 1/2000” up to 32”. 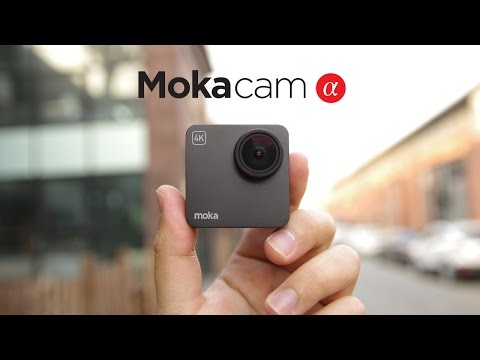 Let’s get to the specs for both to see what each offers regarding hardware starting with the Alpha S. The Alpha S features an Ambrella SoC outfitted with a Sony IMX 117 image sensor capable of rolling 4K video at 30fps and 1080p at 120fps. There’s a built-in 6-axis gyroscope, Wi-Fi, Bluetooth, GPS and built-in 800mAh battery. However, there is an optional magnetic snap on 1100mAh battery that provides 4 hours of continuous filming (at 1080p/30fps).

As far as apps go, the Alpha’s can stream wirelessly to your mobile devices (iPhone/Android) via a Wi-Fi or Bluetooth connection, however, with Bluetooth, you can add trajectory and GEO-tagging information to your videos. The built-in gyroscope helps to eliminate shaky hand syndrome and there is a built-in tripod mount for increased stability if need be. For those who prefer seeing the action on the big screen, there is an HDMI port that lets you preview and playback your videos in all of their 4K glory.

Both versions of Makocam’s Alpha 4K cameras are available now on Indiegogo with starting pledges of $99 for the Alpha and $149 for the Alpha S. You can also get them bundled with the LCD view screen for $149 and $189 respectively. Those interested can also get an accessory pack for $59 that includes LCD display, magnetic battery, and remote. For more information on Makocam’s Alpha campaign head here.

This is The New Flashforge ‘Hunter’ DLP 3D Printer