When you’re a kid, concepts of prejudice and discrimination don’t exist. It is only when we are subject to others that hurtful notions like sexism and racism seep into our subconscious – altering the way we look at the world.

The LEGO company is a group that always strives for inclusion, so it’s a wonder that it took so long for them to come up with a LEGO set that celebrates the LGBTQ community. 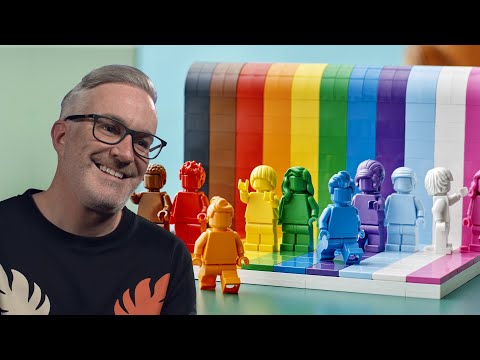 “Everyone Is Awesome” is a $34.99 LEGO set comprised of 346 pieces. You have 11 faceless minifigures – each one color-coded to a section of the LGBTQ rainbow flag. Behind the minifigures is a rainbow backdrop, which you can build using the provided LEGO blocks in the set.

When properly assembled, Everyone Is Awesome measures 4 inches high, 7 inches wide, and 5 inches deep. It isn’t as grandiose as, say,  the LEGO Millennium Falcon but it will definitely brighten up your desk and show your support of the LGBTQ community.

Another cool aspect of the set is that unlike most minifigures, the ones in this set are faceless. This leaves it up to the person assembling or admiring them to determine their gender – making everyone accept who they are.

The set is actually designed by LEGO’s Vice President of Design, Matthew Ashton. Identifying as LGBTQ himself, Ashton already has something close to the finished Everything Is Awesome set on his desk. When the LEGO Group brought up the idea to create something which uplifted acceptance and diversity, he brought his set forward. After some refining from the LEGO group, you have the set you see before you today.

The Everyone Is Awesome set will be available this June 1st, 2021. You can check out the official LEGO webpage to find more details on this all-inclusive set.