Seamlessly bridging the physical and digital worlds has proved to be a significant challenge for even the world’s most advanced electronic manufacturers. While HP has made considerable strides with their “mixed reality” Sprout platform, the creative market has grown to favor more portable tablets and laptops over full-fledged desktop platforms.

With Project Zanzibar, the Microsoft Research Team hopes to blur further the distinction between the digital and physical worlds—this time, in a portable implementation that can be rolled up, stowed, and paired with existing tablet computers. 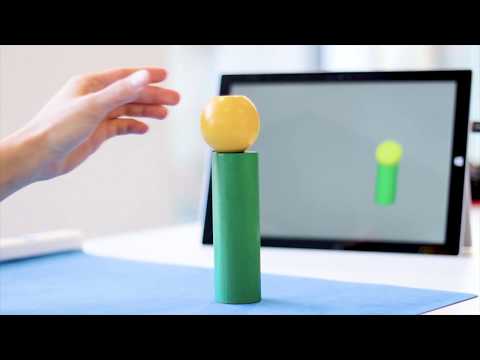 While their early prototypes focus on expanding toy sets into interactive experiences (including creating animated 3D rendered movies that mirrored how children were playing with the physical toys), it’s easy to see just how far this technology could go in professional applications.

“The physical world is such a rich place, abundant with dimensionality and materiality,” explains Project Zanzibar Researcher Haiyan Zhang in a company blog post. “Our vision is to tap into that richness and imbue it with that digital magic. We hope that Project Zanzibar is a step in that direction.”

“(The) moment for tangible user interfaces indeed is upon us,” explains the team in a blog post. “And if the passion of this research can be as inspiring in the outside world, then we may indeed be at a turning point in the realization of natural interactions with computers that lead to the next era of how we think of – or don’t think of – computers when we are using them to create, learn, play and build.”

Read the team’s research paper in full over at Microsoft.

The COMBAR is the Ultimate Heavy Duty Multi-Tool