After carving a wooden spoon using a spoon, you would think craftsman Alex Apollonov wouldn’t have any more inception-like tricks up his apron. Well, you would be sorely mistaken for thinking so.

Upon discovering a stray tree stump in his backyard, Apollonov decided that the best way to get rid of the said tree would be to make a wooden axe out of it. Once completed, he would then use the axe to chop down the rest of the stump. Easy, right? 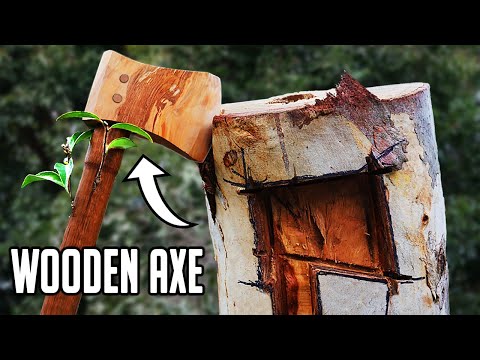 Unlike his wooden spoon project, Apollonov didn’t have any restrictions in making the new tool. So to get the wood from the tree, he used a good, old chainsaw.

Blessed with a chunk of the stump, Apollonov now had to dry the wood to make it hard and sturdy. His piece of wood was wet from being exposed to the elements, so he had to pop it into the microwave to remove all the moisture. While the microwave gag looks like a joke, woodworkers actually use this method as a way for treating wood.

Sadly, Apollonov realized too late that you’re supposed to treat the wood in a microwave slowly for a couple of days – not at an abrupt high temperature like what he did. This resulted in cracks on the edges of the wood. Thankfully, most of the damage was on the edges; so all he had to do was work around it.

Apollonov drew a guide for the axe head and began cutting away at the wood. Once it started to take form, he used his belt sander to cut the grain upwards. In theory, this would make the axe stronger and allow it to cut better.

He also added another stencil on top to better align the width of the axe. Finally, he drilled a hole right through the top to make room for the handle.

It’s nice to know that Apollonov keeps his errors in his videos. Not only does it make for some fun entertainment, but it also allows viewers to learn from his mistakes.

In this instance, he forgot to cross-check the width of the handle with that of the axe head hole. Since the hole was much too big, he fixed his mistake by stuffing in a bit of wood into the hole and gluing it in place.

Connecting the Axe Head and Handle

Now in a normal axe, you would drive a wedge into the axe head to secure it to the handle. But since this axe’s handle and head are made from the same material, the parts would surely crack and break.

Instead, Apollonov decided to hammer in a couple of dowels into the two holes he drilled on the side of the axe. While not as secure as a wedge, he’s hoping this would be enough to hold the axe while it is cutting the tree stump.

The Moment of Truth

After gluing on a couple of leaves and covering the axe in a mixture of olive oil, vinegar, and lettuce for aesthetic purposes, the axe was finally ready to go.

Apollonov raised the axe high above his head, brought it down with all his might and…

… the axe broke right at the head! It turned out that using less of a material to break the same material would just result in one very disappointing build. There goes a whole month’s worth of work, splintered just like the axe. While the concept was great, the execution and the materials used could not live up to the expectations Appolonov had set for it.

If you want to see projects Alex Apollonov has made which actually worked, do check out his YouTube channel, I Did A Thing. You might be pleasantly surprised when the build in the video you’re watching actually turns out right!

The LockPickingLawyer Puts Every Security Device to a Test