There are several reasons why Andrey Rudenko would have wanted to print his own 3D Castle – he wanted his own backyard kingdom and rule all Makerbots, or perhaps something as simple as revolutionizing the construction industry. We caught up with this interesting man, to get under his skin and understand why a 3D Castle and not anything else.

Talking about inspiration, Andrey said, “We live in a time where many things are being improved by technology – military, medicine, education, etc. The construction industry, on the other hand, has not had major revolutions in over a century. Having been involved in home development for about 25 years, I had a large interest in modernizing homes. I envisioned this technology as a means to create homes with many incorporated creative elements. Thankfully, I have been able to turn my vision into a reality.”

The 3D House printer is a result of experience he gathered over the years working in the design and construction field, experimenting with different tools and equipment. All his previous hobbies and experience came in handy when constructing his printer. 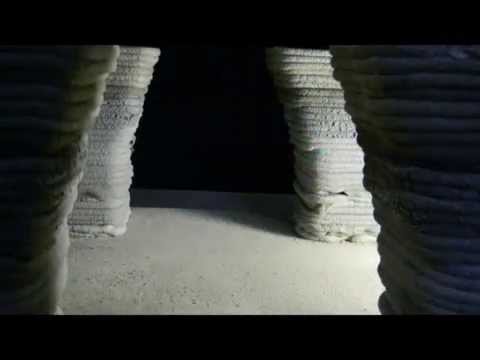 When asked about the key innovation, Andrey says that for years, ideas circulated on the Internet about printing houses with 3D printers. “So far, there have only been a small number of attempts to realize this dream. I believe I have achieved a milestone with my work. I’ve designed and implemented a 3D concrete-extruding machine, which pushes and layers concrete in very fine, high-quality layers of almost any size and configuration. I plan on printing everything as one piece, even if it’s the size of a house. The functionality of the printer allows printing an object/house as one piece.”

Of all the things the weather has been his greatest enemy; heavy rain inhibits progress, and printing in the winter season is not possible just yet. In addition, this is new technology and it will certainly need modifications and tuning along the way.

The critical part of the 3D printer is the extruder. He came up with a number of designs. Testing showed their pros and cons. Eventually, he got it worked; he was able to print out a very first ugly sample. “Designing process involved a lot of research and experiments. The printer with the size of the castle required powerful motors and matching drivers. I was lucky to run into James Newton’s Toshiba drivers that worked just great.”

Details on the gear used: The printer is based on the RepRap project with Arduino Mega 2560 microcontroller board (f/w, s/w –Marlin, Pronterface). The future plan is to experiment with the Smoothieboard that should give Andrey an option to use a pause button.

Are Robots Here For Jobs?

The Most Annoying Thing in CAD: Survey Says…