Normally when you make a knife, you have two main parts: the blade and the handle. The former is normally made out of some kind of metal while the latter is made from a separate material that provides a good grip like wood or rubber.

While full tang knives exist (meaning the metal covers the whole portion of the handle), only a few knives use metal as a handle material. The answer behind this lies in the characteristic of metal being smooth. Unlike wood, metals don’t provide good grip unless they are properly shaped and textured.

However, for the sake of our curiosity, let’s defy the stated fact above and see how reliable a knife made from a single slab could be.

Taking a knife model from designer Aslan Zhanabayev, YouTube creator Slavik Tely turns a 3/8 inch slab of high carbon steel into a full tang knife with no extra handle. That means no other metal, wood, or any other material other than the steel slab has been used to make this kitchen knife. 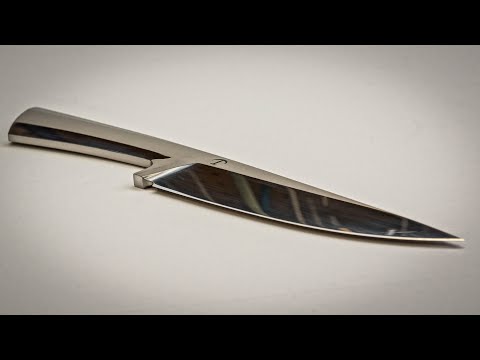 As you would expect, a lot of cutting, sanding, and drilling is needed to turn this chunk of steel into a fine blade. Slavik starts by sketching the initial knife shape into the steel and cutting it using a band saw.

Right now, the blade measures 3/8ths of an inch thick (or 9.5 millimeters) and weighs 12.75 oz (.79 lbs). Both the weight and the thickness of the blade will be decreased as the metal is cut and shaped.

To help with the different cuts, some blue layout fluid is painted on the width of the steel. This allows for easy markings of the various measurements needed to trim this hunk of metal into a thin knife. Once all the lines have been drawn, the knife goes back to the band saw where the excess metal is cut and removed.

After sanding the now thinner knife on a belt sander, it’s time to shape the blade’s different parts. More layout fluid is applied to the side before taking the knife back to the belt sander to fashion out the cutting edge.

The knife’s heel can be fashioned with the spine and the cutting edge now well-defined. Instead of taking it back to the belt sander, Slavik uses a file to carefully shape out the lower rear part of the blade. You can see he also has a bit of scrap steel which he places along the spine of the knife to prevent it from accidentally getting filed down. Sand the whole thing afterward and the knife heel is good to go!

Carving out the knife handle requires a combination of all the techniques he has used up to this point. Upon marking the metal with layout fluid, the handle goes through heavy belt sanding and filing with multiple different files before being sanded down. Slavik also adds a small groove to the bottom of the heel for some extra pizazz before popping the knife into the forge to superheat it.

He leaves the knife to cool for a while before sharpening it a bit and popping it into his oven two times at 400°F for two hours. Afterward, it’s back to the belt sander for some final sanding before he engraves the knife with his signature logo.It would be a shame to go through so much effort and have a dull knife to show for it, so Slavik gives the knife a good sharpening and tests it on a piece of paper. Satisfied, he shows it off to us before hiding it away in his kitchen drawer. After all that sanding, filing, and cutting, the finished knife now weighs 8 oz (.5 lbs).

The Slavik Tely YouTube channel is dedicated to making all sorts of sharp and deadly items – some can be used in the kitchen, others in real combat situations.

Handful of Things That Can Survive Hydraulic Press