I am sure you have asked yourself before if there is anything that can survive the force of a 100-ton hydraulic press. Well, this YouTube channel dedicated to crushing stuff using the said machine will satisfy that weird curiosity.

We’ve seen the Crazy Hidraulic Press channel crushing some interesting stuff, but ‘sometimes’ something survives under the foot of this powerful machine: 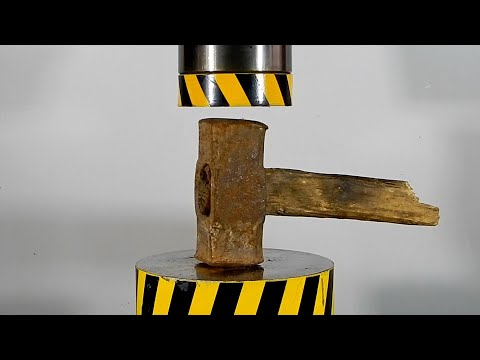 The title of the video is a bit misleading, since not everything shown actually makes it out from under the hydraulic press alive.

Objects like anvils are expected to give a lot of resistance, thanks to their high density and large size. But what’s curious is that even some smaller objects can leave a literal lasting impression on the hydraulic press.

Take a well-made ball bearing or a chunk of tungsten. Place these under the hydraulic press and watch as they get pressed into the pressure plates. There’s no way anything can get out of a 100-ton press unscathed, but this is a different story. Yes, it has received some damage but it has also left some marks on the machine’s surface!

Bulletproof ceramic plates and railroad tracks crumble under just 90 tons of pressure, so it’s interesting to see Rupert’s drop take just as much punishment as these dense materials.

For those who don’t know, a Rupert’s drop is made by pouring molten glass into cold water. The glass solidifies, producing a droplet with a very dense bulbous head and a very fragile tail end.

It wouldn’t be very interesting to pop the brittle tail end under the hydraulic press, but with the dense head underneath it, it becomes a party. It’s only after applying a generous amount of pressure that the Rupert’s drop shatters into a million tiny pieces.

If you count them properly, only 5 items really survived the 100-ton hydraulic press. You have two different ball bearings (the smaller one being partially crushed), two anvils (the cheaper, China-made one was easily but not quite completely pressed), and a tiny piece of pure Tungsten. Considering they’ve been putting everything under the sun through their hydraulic press, I’m impressed that the number of objects which survived even made it past three.

If you’re looking to fulfill your crushing needs with a bit of ASMR, check out the Crazy Hidraulic Press Channel.