As the story goes, Leonardo Pisano Bigollo was a young man in his twenties during the year 1202. A member of a prominent local trading family, he spent a lot of time traveling to the Middle East. During his travels to the Arabic countries, he became enamored by the mathematical ideas and formulas used in commerce. Later in his life, he would publish a book on mathematics called Liber Abaci, and would soon come to be known as Fibonacci, creator of the Fibonacci Sequence.

These days, the numerical sequence created by Fibonacci is used to explain an expansive range of phenomena that ranges from nature and science to design and art. Among other visual patterns that have come to represent the Fibonacci sequence is the nautilus shell—particularly as it appears in nature as a multiplying number sequence in everything from tree branches and pine cones to rose petals.

More recently, woodworker Paul Sellers gave tribute to Fibonacci with handy camera work to present the creation of Fibonacci spirals using simple wood shavings. If you need an excuse to close out of your inbox tab today to take a quick breather, let this be the reason why: 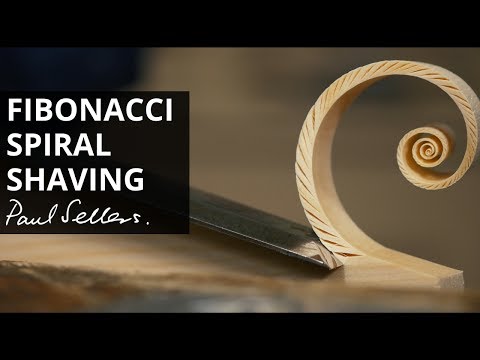 Be sure to check out the rest of Sellers’s impressive woodworking YouTube channel featuring everything from joinery techniques to making your own tools here.

Get Lifetime Access to 2TB of Secure Cloud Storage for Just $59.99