Is This How Apple is Avoiding Another Bendgate with Their iPhone 6S Models?

Although only a select few of the millions of iPhone 6 Plus models sold ever (reportedly) suffered from the effects of Bendgate, it would make sense for Apple’s industrial design team to avoid another PR circus centered around the integrity of their designs with the upcoming iPhone 6S Plus (assumed model name).

In a newly-uploaded video, YouTuber Lewis Hilsenteger of Unbox Therapy – who some might remember as the original iPhone 6 Plus Bend Tester – compares the rear casing of an iPhone 6 with the leaked rear casing of the purported iPhone 6s.

According to the video, Apple has used a stronger and lighter aluminum alloy (the 7000 series – which is also used on the new Apple Watch) rather than the 6061 series that was previously used on the iPhone 6 models. Although 6061 isn’t necessarily a poor material choice, it made the case nearly twice as thick around the volume button region – the exact area where (some, not all) users were reporting a bend.

While the decision to use a stronger aluminum for the phone’s body (assuming that it’s true – which it likely is) is sure to please some users, it has also been rumored that the new phones will feature Force Touch integration and a Touch ID update, among other features. 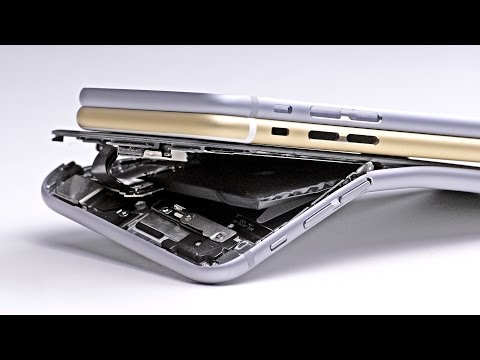 As for when users can expect to find out for sure about the updated design changes, Apple will be making the announcements official on September 9th at their annual Fall Event.