This is a guest post by Daniel Herzberg about his experience over that last few months of going through open-heart surgery and what he found out about a company that is changing the lives of people everywhere. You can follow Daniel on Twitter, view his models on his GrabCAD portfolio and check out his blog with more of his story.

Were you at SolidWorks World 2011? If so, do you remember the second General Session, when Jon Hirschtick introduced us to the founders of MAKO surgical? This company is using visionary robotic techniques to revolutionize joint surgery. How about SolidWorks’ continuing support of Design that Matters, the nonprofit company that designs medical devices for use in the developing world? I’d like to introduce you to another medical device company, which is using SolidWorks to improve the lives of patients around the world, as well as right here in your favorite blog.

On August 17th, I underwent open-heart surgery to replace a heart valve which has been defective since birth. My choices for the new valve came down to a biological donor valve (from a pig, cow, or human), or a mechanical valve. The biological valve would have to be replaced with further major surgeries every 10-15 years due to wear, but would not require blood thinners (since it would have completely natural blood flow (or “hemodynamics”). The mechanical valve, on the other hand, would be permanent, but would require blood thinners to avoid clotting, involving a not-insignificant life change.

My doctors then told me about a promising new valve from a company called On-X Life Technologies, Inc. The designers of this valve had paid extra attention to every aspect of their valve that would improve hemodynamics, and hopefully someday (once all the data come in) eliminate the need for blood thinners. Through my research of the valve, as well as my direct contact with the company, I’ve learned how they used SolidWorks to design this revolutionary, life-saving medical device. 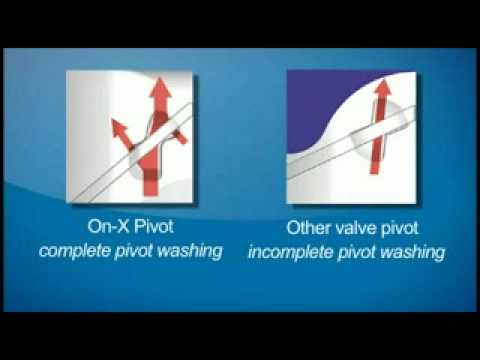 The design of a new kind of heart valve

The designers developed three new features which would decrease turbulence in the blood flow. First, they added an inlet flare (much like the smooth cowl of a jet engine), to mimic the shape of a real valve. Second, they extended the outer valve ring, to match the natural length of a biological valve (a length to diameter ratio of 0.7, as it turns out.)

Third, they designed the valve’s leaflets to open all the way to 90 degrees, where other valves only open to 85 degrees or less, increasing turbulence. It’s possible to evaluate the amount of turbulence in the circulatory system by measuring the levels of a certain chemical, which is released when red blood cells are ruptured.

But you may be asking, if the leaflets open all the way to 90 degrees, what forces them to close? On-X has designed a special pivot which uses the drag force of the flowing fluid to initiate closure of the leaflet. The pivot it also designed such that blood never stagnates in the openings, further reducing clotting risk.

To design such a sophisticated device – with only three parts – On-X needed a powerful CAD package. They had been using Pro/Engineer until recently, but this year, decided to make the switch to SolidWorks. For fun, I decided to model a rough representation of the valve myself. You can find it on GrabCAD, here.

If anyone out there is interested, here’s a SolidWorks brain teaser for you: Given the diameter of the valve and surrounding artery (1 inch) and my systolic (115 mmHg or 15.33 kPa), and diastolic (65 mmHg or 8.666 kPa) blood pressure, can you create a semi-accurate model of the valve opening and closing? Complete with snazzy visualizations, of course.