Remember when life was nothing but eating large amounts of pasta and disassembling engines? Yeah, that was the best! Especially the time you shot noodles out your nose and into the crankcase – that squirrel didn’t even know what was coming. Ah, simpler times perhaps. Though some would question their ability to launch noodles from a nostril, there are plenty who could tear down and reassemble an engine. But what about 3D PRINTING THE ENGINE FIRST?

Yes, never mind the challenge of building an engine – let’s build a working one from layers of plastic that warp if you look at them wrong. Well, Eric Harrell from Santa Cruz is up for the challenge–and it’s not his first time either. His latest project is the model, print and assembly of a fully-functional Chevy Camaro LS3 V8 Engine. The build took over 200 hours of printing (72 for the engine block alone) and, though smaller, the final product assembles exactly like the real engine. Have a look: 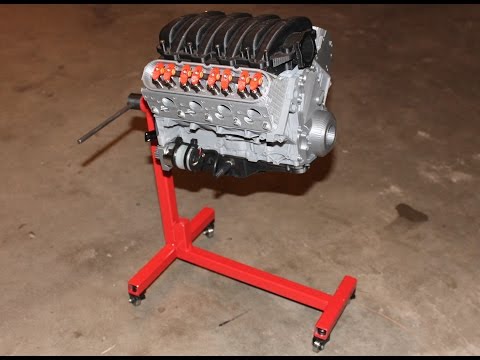 Eric modeled the engine in SolidWorks and used a RepRap Prusa i3 to create the scale model that includes 64 unique parts. He has provided all of the .stl files (he’s not releasing the SolidWorks files yet), plus seven files that include assembly and placement instructions. He has also included a hardware list and a complete parts list that includes print and finishing instructions. If you’re ready to start assembling however, he has hardware kits available for $52, and all electronics, which includes the 500 rpm motor, speed controller and power supply, for $27.

He modeled the Chevy V8 from specs, pics, CAD files, and service diagrams of the engine. Three have already built the model and judging by Eric’s other builds, he knows his stuff. He has four other built-to-scale functioning, 3D printed engine builds along with various other detailed automotive projects. My favorite part is the engine stand. Though he doesn’t have parts and build instructions for that yet, he’s gathering supplier and part list to provide that as well. You can email him to be notified when it’s available.