Makerbot announced today at CES 2013 the release of their Replicator 2x Experimental 3D Printer, an upgraded version of their successful line of Replicator 2. I’m reading the feeds as the info comes in and it’s looking good. You get the impression Makerbot is trying very hard to hit the Living  Room and the Office, all at once. Watch the video after the jump. 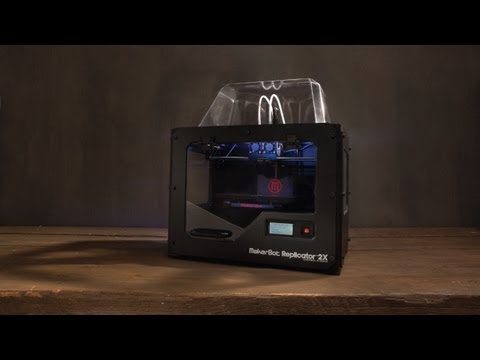 The X stands for “We’re Upping the Ante”

The Makerbot Replicator 2x picks up where the Rep 2 left off – metal frame, same controls. The definitely added a whole slew of new things. ABS and PVA. Awesome. Enclosed Build Platform. Well done (don’t get caught up in those Stratasys patents). Dual Extruders. But of course. These are things we knew Makerbot had to sell to the public – the waters have risen, the competition is fierce.

But what I’ve been seeing is an emphasis on use rather than features. This is a key element of Makerbot’s strategy and is going to serve them well in the future. Thingiverse, after all, made the Thingomatic the 3D printer to buy two years ago. The big announcement is what they’re doing with Makerware. Check what was written on their blog.

Colors
The most obvious, and by far the simplest, use of dual extruders is to enable two color printing.  Although a single-color object could be painted, there are times when painting a particular object would require a great deal skill or be very time consuming.  While printing a plastic sushi set for my daughter I used dualstrusion to add black plastic “soy sauce” to white plastic dishes.  Sometimes, painting an object might even be impossible.  Imagine an object such as a bottle, vase, or an egg where you want to have an image or design inside.  While it might be impossible to paint inside such an object, the interior image could be printed inside the object as it is being created.

Dissolvable Support
Dual extruders allow for printing with a dissolvable support material like PVA.  Being able to print with a water soluable material means your robot could print entire mechanical devices complete with moving pieces.

Varying Densities
With two extruders it would be possible to create an entirely solid plastic object with a customizable density.  This could be used to make trick dice, a balancing toy, a toy that can’t be knocked down, a toy that can’t be stood up, or maybe a boat that is difficult to sink.

Mechanical Properties
Different extruded materials, such as ABS and PLA plastics, tend to have different physical and mechanical properties.  ABS tends to be more flexible and PLA tends to be more rigid.  A 3D printer with dualstrusion can combine the two plastics into a single object that is both flexible and rigid.

Simultaneous Dual Printing
One of the more exciting developments with dual extruder printing was a recent contribution by Thingiverse user thorstadg.  Thorstadg created a method for operating both extruders simultaneously – allowing the printer to print two objects, one with each extruder, at the same time.

Variable Resolution
Two extruders means you have two nozzles at your disposal.  However, there is no particular reason for both extruders to have the same size nozzle aperture.  With one very fine nozzle aperture and one relatively large nozzle aperture, a single object could be printed with quick printing coarse features and very high resolution features that take more time.

This is what was so sorely missing with 3D System’s CubeX and other printers – features with purpose! Sure everyone wants colour. That’s easy. But who in the industry is pushing variable resolution, simultaneous dual printing or variable density. I haven’t seen it yet – until today. Smooth move, Makerbot. Check out what Bre had to say as well (or as the press release said, “Bre challenged”)

“The new MakerBot Replicator 2X Experimental 3D Printer enables the daredevils and trailblazers of 3D printing to explore the frontiers of multiple materials and colours.”

But what does the Experimental mean? I’m hoping it doesn’t mean ‘buggy’.

A 'Nod to Makers': The Modern Hardwood and Steel Lamp by John Ford