As the fastest road bike on the planet with wicked-cool industrial design, the new Specialized S-Works Venge is also one of the most technologically advanced bikes ever made. Needless to say, Specialized didn’t want to skimp on the marketing for this one.

In an effort to engage their audience beyond photos and videos on their website, the Specialized Bicycle Components marketing team wanted to expand the story of the S-Works Venge while allowing the user to control how they viewed the bike and how quickly the “exploding” animations occurred – animations that were beautifully lit and accurately rendered.

Ultimately, what they wanted was beyond what most animation experiences on the web typically offered.

After searching around, the team chose Thomas Burke & Others (aka TB&O) to create an immersive virtual reality experience that matched what they envisioned but hadn’t been done within the technical and bandwidth constraints of the web. With the pressure of a tight launch schedule, one of the biggest challenges in the brief for the TB&O team was to use CGI tools that allowed them to work alongside the Specialized engineers and marketing team to facilitate fast and efficient collaboration. 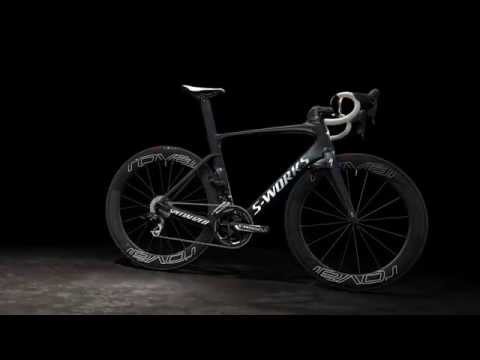 Using Luxion’s KeyShot 3D rendering and animation software, the TB&O team were able to get the job done while being easy-to-use for team members collaborating in real time – whether side-by-side or over video conferences, with immediate results. This proved to be vital for the team’s success due to the Specialized team wanting both an interactive 3D-enabled desktop and a mobile viewing experience – both of which were created with the KeyShot animation tool and KeyShotVR, which creates video quality ray-traced 3D content.

The TB&O team used both these tools in combination to create “exploding” content and the immersive interactive experience. This had seldom been done before and never on this scale. This project pushed boundaries and wouldn’t have been possible without the support of the KeyShot development and support team.

At the inception of the project, nobody anticipated that there would be more than 780 parts that all had to move in unison or within sub-groups of other parts. The animation of the front end of the bike alone was very tricky because the parts were all on different axes. These parts had to behave as though they were moving with the steer tube that connects the handle bars and stem to the fork.

Principal CGI artists Tim Feher, Mike James, and Dries Vervoort took real-time feeds of bike parts from the Specialized engineers and set about creating material surfaces that would make the bike appear real. The Specialized team wanted the result to be photo-realistic and not the typical neutral look of CAD renders. That meant that the CGI team had to spend time studying the look and feel of the actual finishes on the bike and its components. It also required setting up various lighting scenarios to see how the finishes behaved in the real world. KeyShot’s material editor made it possible to get the photo-realism that the client was looking for. Every material in this experience was created from scratch.

One of the most challenging materials to tackle was getting the right look for the unidirectional carbon fiber that is naturally irregular and then sprayed black at joints and clear-coated to a matte finish. Additionally, to create a realistic front and rear wheel, the carbon rims had to be separated into multiple parts. The tires which are an important part in making this the fastest bike on the planet, had to be rendered from scratch. While KeyShot handles creating complex materials well, the team used Solidworks and Maya to create the components that didn’t exist in the CAD files supplied by Specialized.

One of the most visually interesting parts of the bike is the proprietary integrated braking system. The front brake completes the forks trailing edge, aiding aerodynamics, while the rear brake drafts off of the seat tube and water bottle. To highlight the front brake, TB&O built an animation that simulated the front wheel turning. This necessitated that the materials be believable and the lighting draw attention to the beauty and functionality of this unique industrial design.

Typically, animations appear neutral or flat because the lighting is a compromise. The problem being that if the light looks great at one camera position, as the animation moves there are inevitable points where the lighting is unacceptable. The compromise is fairly flat light throughout.

To create the emotional reaction the client was looking for, the TB&O team had to create a physical environment that was as simple as it was dramatic. So, rather than relying upon just a HDRI lighting environment, the team built a transparent set and supplemented the light provided by a custom HDRI light environment with 23 lights created from individual pieces of geometry. The result is dramatic light that highlights the product no matter where you are in the VR experience.

At the same time that TB&O was creating the virtual reality experience, a team of web designers were building a new web experience to support the launch of the Venge. The ability of KeyShot to produce ready-to-insert HTML5 code and JavaScript to support progressive loading and smooth gesture control was important to getting the best user experience within the compressed launch schedule. Equally important was the flexibility to produce individual image frames that could be used to build a custom vertical scroll animation for the site.

Of course, one of the most valuable by-products of a large undertaking like this project is the ability to repurpose the assets. Using files that they had already created, TB&O were also able to create ten short videos that Specialized incorporated into their PowerPoint presentation to dealers. Similarly, it is easy to change the product finishes, the background, the lighting and to create still images as well as other VR experiences. While the project was initiated to support the web experience at launch, Specialized has found numerous other ways to use the assets to support social media initiatives, and other marketing and product development needs.

To see the finished product yourself, head over to the Specialized S-Works Venge website.