Back when we caught our first glimpse of the 3D prints made using Multi Jet Fusion Technology in October of 2014, it became quite apparent to us that HP not only changed the game but effectively positioned themselves to control the entire court on which everybody plays. This morning, after years in development, the HP 3D printing team wants to reinvent 3D printing all over the again with the world’s first production-ready 3D printing system.

Although the printers – which take up about as much space as a sofa – are designed for slightly different use cases, both make use of the platform’s HP Jet Fusion 3D Processing Station. Unlike the messy post-processing tasks required for SLS 3D printing, the HP design team put extra consideration into making the post-processing stage self-contained and as automated as possible. Additionally, a self-contained material gathering system ensures that no reusable powder gets left behind.

Although MJF is similar to existing 3D printing processes that build up material layer-by-layer, the printing and curing processes are combined in a bidirectional continuous pass from right-to-left and vice versa (for optimal build time). Within a hair of a second, a new layer of powdered material is deposited and yet another complete layer of the desired finished object is created. At this stage, various colors – remember, HP has already invested billions of dollars over decades into printing R&D – can be added to create parts that rival those produced by conventional manufacturing methods. Perhaps what is most exciting, however, is the ability to create individual parts with embedded intelligence, electrical conductivity and even varying levels of part strength – all in a single print session. All of this is due to the ability to control each and every voxel (AKA a 3D “pixel”) within a part – regardless of the feature property.

“Our 3D printing platform is unique in its ability to address over 340 million voxels per second, versus one point at a time, giving our prototyping and manufacturing partners radically faster build speeds, functional parts and breakthrough economics. The new HP Jet Fusion 3D Printing Solution delivers a combination of speed, quality, and cost never seen in the industry. Businesses and manufacturers can completely rethink how they design and deliver solutions to their customers.” 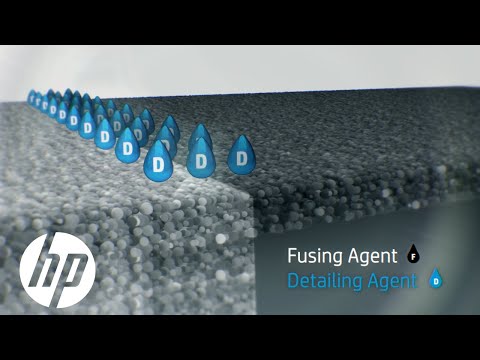 When considering the growing capabilities of today’s existing digital 3D tools –such as generative design software – it’s easy to see just how disruptive MJF can be when compared to existing industrial 3D printing processes or low production runs using conventional manufacturing processes. It’s also likely that the majority of designers and businesses will be accessing MJF through a 3D printing service bureau (at least to start). Due to the low cost of the machine and the relatively low cost of operation and fast print times, users looking for superior quality 3D prints will likely be getting them faster and cheaper than parts created using any other industrial 3D printing process.

As we’ve seen with the recently announced pricing specs for Carbon, a critical component of what will make or break the HP Jet Fusion 3D Printing Solution platform is the price point. Starting at $155,000 for the full end-to-end solution (both a printer and the processing station), printers not only offer superior parts in less time but also at a significantly lower price than many of today’s existing industrial quality 3D printing solutions. While this price point is attractive for model shops and 3D printing service bureaus, there’s still no word on what it might cost to have an average-sized part made.

Although we’ve seen some pretty incredible 3D printing technologies and applications since October of 2014, few have been able to scrape the surface of what HP has been able to achieve for rapidly moving thoughts into superior physical objects at a low cost. As more users turn to industrial 3D printing services rather than dealing with the headache of owning desktop machines, it’s difficult to argue that MJF – and fast turnaround part orders – is the 3D printing and low production part run process of the future.

Find out more over at HP.

SolidSmack Radio | One-Way Tangent to Space (Meet You There)