As we’ve seen, Airbus thinks big. They made monster airplanes like the A380 and they took on aerospace giants like Boeing in the 1970s. They think big, really big. like 3D printing an airplane big. Not tiny little airplanes–big, honking super planes. 3D printing is primed to take off (pun intended) in the aerospace industry as a viable means to manufacture parts and machines rather than prototype them. What does 3D printing do that traditional methods can’t? Strong yet lightweight designs, complete with voids and geometries near-impossible to reproduce any other way.

Forbes busted out a feature on Airbus’s new project very recently. Cabin designer Bastien Shäffer (pictured above) has spent the last two years working on a design that reflects customer’s needs as well as possibilities using 3D printing at that scale.

96% of all Airbus passengers have demanded ‘Greener’ air travel above all else. Not only that, jetfuel prices are getting higher and airline margins are getting thinner. Every kilogram that is shaved off the airframe increases fuel efficiency and reduces greenhouse gas emissions. An aircraft hanger-sized 3D printer seems a bit far fetched, because when you hear ‘3D printing’ you think ‘small’.

Over the past few years Enrico Dini of Pisa, Italy developed the DShape, a large-scale 3D printer that measures 6 x 6 meters and prints concrete in any shape or form. He even teamed up with the European Space Agency and Foster+Partners to see if they could indeed, 3D print on the Moon. You’ll be able to learn all about Enrico in the upcoming documentary “The Man Who Prints Houses.”

Taking 3D printing to the scale of an aircraft is going to be a ‘step-by-step’ process for Airbus, first with smaller machines making certain parts here and there, working out the issues and stretching the technology to its limits. Bastian definitely has the right idea. Look at this flight of fancy. The video below notes that the seats will be outfitted with thermoelectric generators so your body heat will be able to provide power. You know what’s missing? Robotic stewardess serving me and my dog 3D printed Filet Mingnon. That’s right, dogs will be able to fly with you in the cabin by 2050, because anything is possible in the Future. 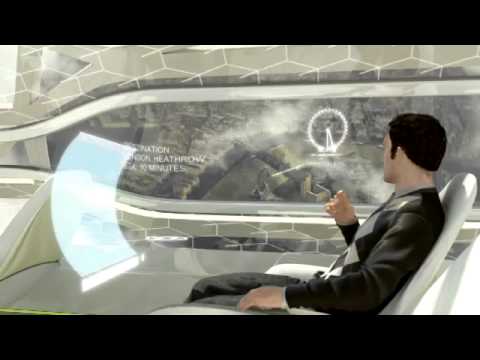 Sit Back, Relax and Watch 3D Modeling Done with a Wiimote