3D Printed Gun Leads To The Arrest Of Japanese Man

We are not here to debate the legality surrounding the possession of guns, but to merely ponder on how things can get out of hand when you don’t take the time to learn about laws in your country and to recognize how 3D printing is making manufacturing possible. First, if ownership of guns is illegal in your country or requires a permit, then stay away from them or get one. Simple! Second, manufacturing items with 3D printer is quick. Maybe not quicker (or cheaper) than buying a gun, but it’s making manufacturing it possible, along with possible jail time. 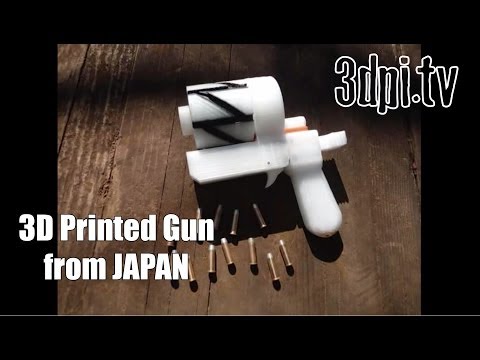 27-year-old Yoshitomo Imura made waves on YouTube, demonstrating his 3D printed zig zag revolver. This demo triggered (pun intended) local police to investigate Imura possessing illegal firearms. Based on this tip-off, local news agency ANN News reports that Imura got hold of some gun files from a foreign site, downloaded them and then went on to 3D print them.

After viewing Imura’s demo videos on the Internet, the authorities confiscated five different 3D printed guns from his Kawasaki City residence. The guns also included the Liberator Pistol and since only pieces of plywood and not bullets have been found on the site, the police are only assuming they could be used for piercing and killing people.

To his bad luck, the investment of a ¥60,000 (approx. $590) 3D printer bought from the Internet has proved to be very costly for this young man. While some news agencies are hinting at resin-made guns, ANN is reporting the use of a RepRap 3D printer and guns that look like they were created through the FDM/FFF process. What may disturb some about this arrest is how working firearms can be manufactured at home and misused. Others may argue that the government is overstepping its bounds.

Compared to the United States and other countries, laws for firearms and guns are pretty severe in Japan. Possession of guns is not entirely illegal; however a long series of background checks are mandatory for even something as basic as a hunting rifle. Japan claims the laws ensures fewer deaths in Japan; according to the National Police Agency of Japan, only 15 gun deaths were reported in 2012, compared to the 11,078 deaths in US in 2010. Needless to say, the population of Japan much smaller and more contained. Still, the quick manufacturing of disposable firearms is an increasing concern.