Having a dash cam really saves you from various road problems. They can provide you strong pieces of evidence that can back you up in your insurance claims in case of a road accident. However, this is only possible if it has sufficient coverage of the scene. This would not be the case if you only have a single cam installed in front of your auto. Well, that’s why you need front and rear dash cams.

Front and rear dash cams provide you two cameras. They will cover the common auto spots that often get involved in accidents, such as the rear. And while there are lots of models available for such kind of purpose, finding the one that offers easy installation and excellent low-light view can be a challenge. As such, we sought the five finest front and rear dash cams with the help of an auto expert, Danny George. So, click on the buttons we prepared for you to check on their best deals now! 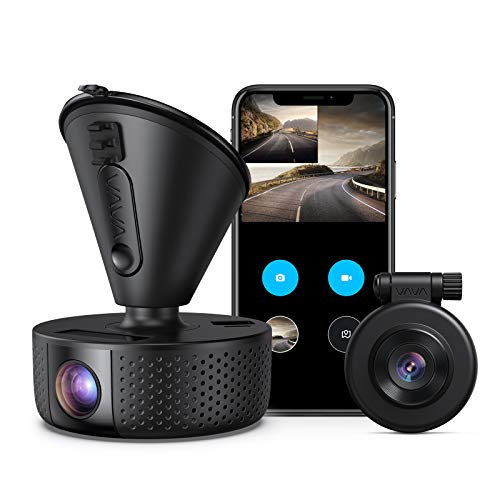 VAVA VA-VD002 brought the game to a higher level by equipping itself with newer and advanced features.

"It offers application connectivity which is only present to a very few numbers of new dash cam models. It is called the VAVA Dash app that lets you access the configuration of the cameras and even download the footage videos to your smartphone via built-in WiFi. With this, you can access the live view option and more," George said.

We also admire the 5-star (or maybe higher) design and build of its front cam that can be rotated at ANY degree. As such, you have the power to twist the camera a little to the left or right or in any manner of your choice. And for the images and footage? HANDS DOWN! Through the combined power of the updated Sony sensors, night vision features, 4 IR lights, F1.8 front lens, and an F2.0 lens, you have cameras that can be compared to the cameras of high-end phones that can adapt to a dark setting.

Lastly, it comes at a very cost-efficient price, given that it has integrations that are commonly purchased separately in other models such as the GPS feature. So, what can we say but this is the champion of the champions! 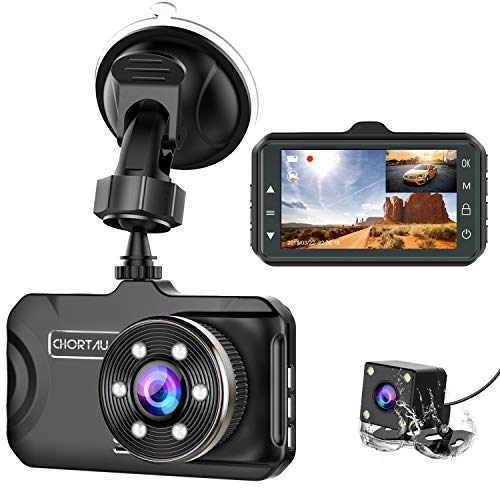 CHORTAU B-T13 is one quality set of front and rear dash cams. It can withstand temperatures from -86°F to +158°F. This is possible through the thick build of the cameras’ bodies which allow them to resist the effect of extreme temperatures. This is primarily important for its rear camera that is installed outside the auto. Compared to most cheap models, the waterproof rear cam won’t show any sign of wearing despite extended exposure to direct sunlight. After testing it under an afternoon sun for three days, we were stunned at how it retained its state without signs of fading or decrease in performance. As for the video quality, it can capture better shots and footage of the car’s environment even at night.

"This is the big difference its IR lighting source can make. Moreover, at 3 inches, it has just the right size that won’t cause any blindspot on your windshield. All in all, we can say that it has all the essentials you need to look for in quality front and rear dash cams: size, quality, durability, and, most of all, price!" George stated. 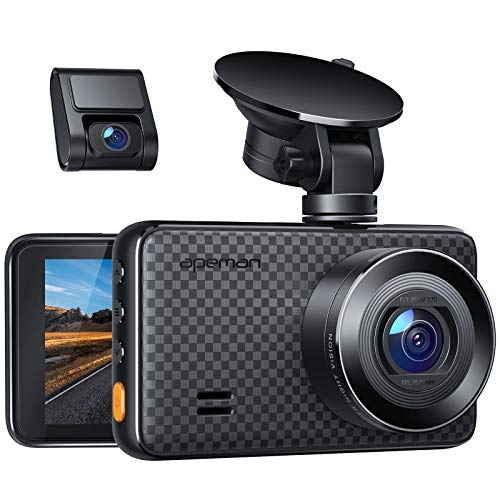 If there is one thing that makes C860 stand out among the other brands and models, it is the capability of BOTH its cameras to capture views at 170 degrees.

"Compared to VAVA VA-VD002, CHORTAU B-T13, and others, its cams are capable of covering a wider view that can reach almost both sides of your car’s rear and front. And although it is just a matter of 40 degrees compared to other rear cameras, it means a great difference when you need a piece of strong evidence when a car hits your side," George explained.

This makes it ideal for individuals looking for unbeatable security for both the front and rear spots of their vehicles. All in all, a very reliable camera, thanks to its excellent view coverage! 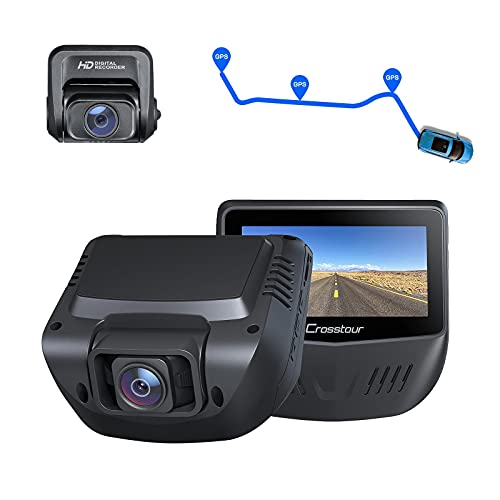 CR900, just like most APEMAN dash cam models, will offer you an abundance of viewing field at 170 degrees on both of its rear and front cams. With this, you can assure yourself that you have full coverage of your car’s environment at all times.

"At 1080p, both of the cameras are very reliable in their job of capturing detailed footage during a bright day. At night, the cameras adjust appropriately to the low-light setting to enable themselves in recording plate numbers that are just feet away from them," George stated.

Most of all, we really applaud the unique and excellent design of the camera heads as you can freely swivel them left to right and up and down. This means you have more power over where you want to point them during installation. 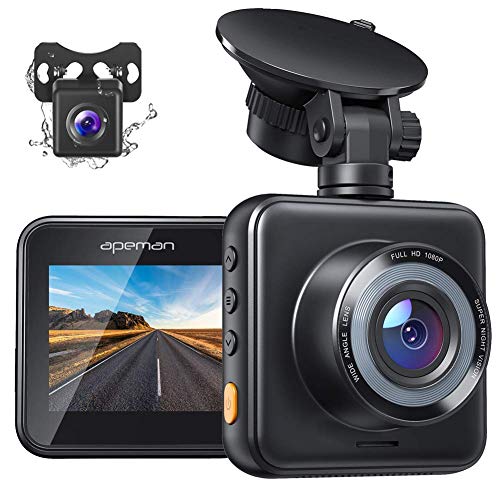 "It can be put at the back of your rearview mirror as if you don’t even have a camera. At almost 2 inches, it leaves you undistracted and your windshield unobscured. Nonetheless, despite its size, the front camera is very impressive. The 1080p video is stellar and bright. Even at night, it can capture excellent details with crisp and clarity. And as for its rear mirror, though there is a need to say that it isn’t as clear as other rear camera models like CHORTAU B-T13 and VAVA VA-VD002, it is still capable of recording accidents with the right amount of details," George remarked.

That said, if you hate bulky cams that often lead to distractions while driving, we definitely recommend C420D. It is compact, yet fully equipped!

This is important for rear dash cams that are installed at the back of your car. Though there is a way to protect such rear dash cams from rain by installing them inside the rear windshield, it is better to have one that can withstand all kinds of weather. Such kinds of rear dash cams are often constructed with a thick build that allows them to tolerate the hot and freezing environment outside the car.

Most front dash cams come at a 170-degree angle while the rear cams come at a 130-degree angle. It is better if you can find cams that won’t go lower than the said angles so you’ll have a wider coverage of the car’s surroundings. You can also opt for those that have flexible swivel abilities as they allow you to freely move the camera lens to any sides you prefer.

Dash cams that are too big can often lead to obstruction issues. However, if you don’t mind seeing the cams recording in front of your sight and if you intend to use it to aid you in reverse movement, getting a considerable size of LCD with at least a 3-inch size would be alright. On the other hand, if you want a dash cam that is easier to be concealed, get the one with at least a 2-inch LCD that you can easily install under your rearview mirror.

Dash cams come in standard 1080p and 720p resolution. This should give you at least the right amount of video clarity you need in reviewing video footage. However, if you want extra assurance, better opt for those that have a built-in infrared light source as they allow better visibility in a low-light environment.

Are dash cams worth it?

There is no need to be involved in a car accident or collision to get the value of your dash cam purchase. Having them installed in your vehicle and the assurance they provide is enough to tell you that they are worth every penny. They will serve as a helpful piece of evidence in the most unexpected times that can save you in your insurance claims and the like.

Some dash cams come with an audio feature which can cause issues in some states. If the recording covers very sensitive content without the knowledge of everyone involve, it can pose some legal problems to the owner of the cam.

Do dash cams record all the time?

When you start your engine, your dash cam should automatically start recording. In case it reaches the memory capacity of the SD card, the loop recording will occur and the oldest files would be erased. Also, while parked, it is also capable of recording videos once it senses movements or bumping on its body.

How long would 32 GB last in dash cams?

With 1080p resolution, a 32 GB SD card can last up to 4 hours of recording which is just enough for most drivers. If you are a driver and often drives for longer hours, we suggest getting a dash cam that can support SD cards with higher memory capacities.