If you are old enough to have used cassette tapes to listen to music and VHS tapes to watch movies, then you also remember how tiresome it was to work the darn things. Apart from the guessing game you had to play when rewinding a song or scene, there was the constant fear of the tape spewing forth its contents like a hungover C3PO. (He ran on tape storage right?)

Needless to say, the present generation will never go through the same trials their forefathers did. With the HDD and Blu-ray Disc phasing out the once current DVD and CD, it’s hard to imagine that two decades ago, people were rewinding their cassette tapes with a pencil.

So would you be surprised to know that a lot of people still use magnetic tape drives to this very day? 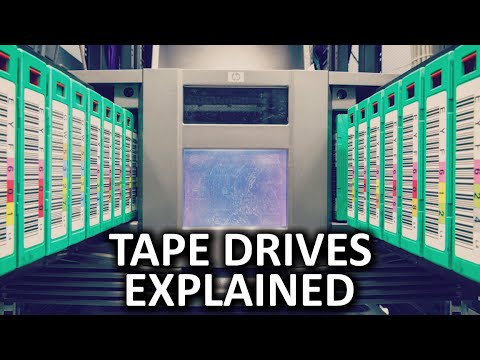 Based on an informative video from Techquickie, tape drives have been an important storage medium since the advent of the first commercial American-made computer in 1951. The tape inside the UNIVAC 1 reached a length of about a quarter mile and held a tiny digital storage space of 225KB.

Things have changed since then. With the replacement of heavy metal tape with plastic tape coated in magnetic substances and using the entire width of the tape to increase the amount of data stored, people could fit entire terabytes of data into a half-pound block.

But why use these magnetic drives when a hard drive can store and access the same amount of data much faster?

Even though accessing magnetic tape drives can be expensive, the tapes themselves are significantly cheaper than other forms of data storage. This may be due to the fact that the medium has been around for so long and doesn’t require as many parts to make as an HDD or SDD.

But the best feature of magnetic tape drives is how sturdy they are. While you would never choose a tape drive over an HDD for everyday use, the former is ideal for storing a lot of files for backup.

Let’s say a company gets hacked and their data gets corrupted. In case of an emergency, they can bring out the magnetic tape drives to recover the lost files. While it would take quite a while to access, you can be mostly sure the data will remain intact for a longer time.

The storage medium doesn’t seem to be going anywhere, either. Sony recently developed a tape that can hold up to 185TB of data. That’s even more space than all the movies you’ve watched (or will ever watch) in your entire lifetime!

Magnetic tape drives may be outdated, but they sure outlast the current forms of data storage. Now, where did I put my Journey tape?

The Spinbox is an Ingenious DIY Portable Turntable Kit

What Are the Best Online Black Friday TV Deals to Look for in 2021?