Back on April 1st, a video hit YouTube that featured a drone outfitted with a chainsaw that flew/cut through everything from snowmen to treetops. Of course, it had some scratching their heads, wondering if it was staged or completely fake. While the idea of a flying chainsaw seems disturbing to some, it turns out the ‘KillerDrone’ is indeed real, very cool, and every bit as disturbing as it appears.

The drone is the product of Miika Ullakko, Henri Kiviniemi and Antti Kunnari from Misty Friday Films, a Finnish film production company dedicated to making films that ‘reach out and touch people.’ The video certainly had that affect, designed as a parody of news outlets highlighting drones delivering mail. As Miika states, “In my opinion, that idea is a total joke! You could write a book about why it is so bad.”

What wasn’t a joke was trying to outfit the drone with a heavy-ass chainsaw and have it actually function while in flight. “There were, obviously, some huge difficulties there, and the system didn’t work as straight forwards as one could assume from the video,” stated Miika. “The drone was on the limits of its carrying weight and couldn’t fly longer than approximately 5 minutes with one battery. It was also super unstable (the pilot reminded us about that every couple minutes) cause the saw creates huge momentum, not only cause it’s heavy, but also cause it’s so long.” 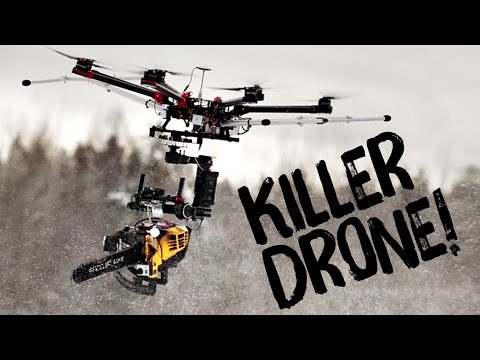 They also had to, essentially, redesign the gas tank and rig a servomotor to the saw’s carburetor to get it to work, as it was mounted to the drone upside-down and missing a handle. “The saw also had to be modified to work upside down by, for example, flipping the fuel system,” said Miika. “We had to combine the saw from two bodies. [We also took] every not-visual-part out to lighten it as much as possible.” He went on to say, “Saws don’t work very well upside down either, since the oiling system of the blade seems to need gravity. We put some oil on the blade manually every time it was down.”

At the end of the day, the drone was successful at cutting through snowmen, icicles and small tree branches, which was no easy feat of engineering skill and directorial cinematography–The Finnish countryside captured was beautiful to say the least. Unfortunately, the drone couldn’t handle the brutality of some simple balloons that, upon attacked, disabled the rotors with their vicious rubberyness. I’m already getting ideas for ‘drone attack prevention kits.’

The Making of Nuimo, a Piece of Hardware That Wants to Free You from Hardware