While companies are cashing in on kiddos rolling around atop exploding, self-balancing and frustratingly mis-named two-wheeled ‘hoverboards’, people with more passion, knowledge and design prowess are attempting what has always seemed the impossible. People like Frank Zapata, CEO of Zapata Racing. The company recently published a video showing Zapata flying on what looks like a real life hoverboard. While some on the internet thought this new was a hoax, it’s all too real.

We’ve been following Franky since he revealed the water-powered Flyboard in 2011. If anyone could come up with a hovering contraption you strap to your feet, he can. And did. The Flyboard Air is Zapata’s new creation that has given him the power of flight. But how does it work? A magic blast of awesome is the first answer that comes to mind, but of course this isn’t the case. The board is powered by four 250HP engines for a total of, yep, 1000HP, more than most supercars. Each engine can then be manipulated separately to change the angle and thrust. This power is stabilized using a logic board and algorithms along with the balance and control from the rider. The rider himself is wearing what looks like a backpack. It is, in fact, a backpack. A backpack full of kerosene Jet A-1.

But what about if something goes wrong? Since the risk of crashing is high, and it’s already happened at least once to Zapata, safety is a big concern for the Flyboard Air. It’s built in such a way that if one turbo-reactor fails it will continuing flying. So far, Zapata has only flown the device over water, but the first flight over land will happen in the next few months, where Zapata hopes to break the two-mile range barrier with a top speed of 80 km/h. The device itself is capable of going 90-100 km/h, but during flight tests Zapata hit the rim at 55 km/h. 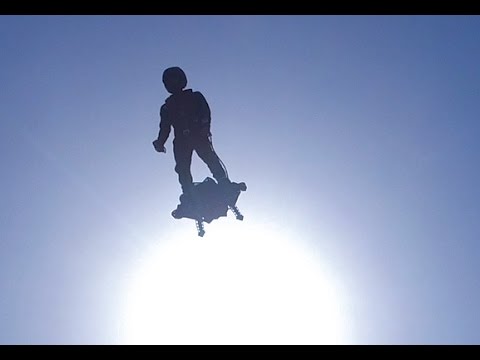 The Flyboard is still in the development phase, but Zapata is hoping to get it out in the marketplace soon. He makes the warning that not just anyone can hop on the Flyboard. People need at least a minimum of 50 – 100 hours in the original water-powered Flyboard. The team is also working on another project that uses the same air technology. This board is planned to be easier to use by the general public as well as something you can sit on. With these new developments, a future with hoverboards doesn’t seem like just a distant dream anymore.

The Bubble Wrap of the Future is Made from Dried Seaweed