Well, it’s finally happened. After years of fumbling on quadrupedal legs and jumping like patients with back problems, robots have finally learned to run on rough terrain.

ACHIRES (short for “Actively Coordinated High-speed Image-processing Running Experiment System”) is an Ishikawa Senoo Laboratory running robot system which uses a high-speed camera to detect the legs’ position up to 600 fps. This information gets transferred to high-speed actuators which adjust the legs based on built-in reference postures (which is how the robot stays stabilized when pushed as well as on different types of terrain).

In layman’s terms, a camera reads the terrain and position of the legs while actuators do all the heavy lifting and move the legs. 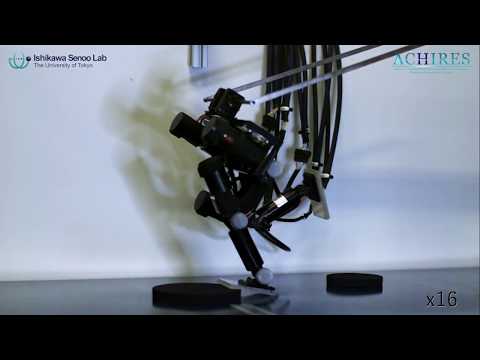 The legs measure 14cm and are set to run at a sagittal plane. While the top speed of 4.2km/h isn’t much, it’s still a lot faster than when many of us try to exercise after an extended vacation.

If this wasn’t enough, the 0.91kg robot is even capable of somersaults! Throwing one foot forward, the robot jumps and curls both legs while in the air. It isn’t shown in the videos, but the makers of ACHIRES plan on increasing the number of biped tasks the robot can do.

One important detail that the engineers have improved on is the control method for the bipedal running system. The previous version of the ACHIRES used to take posture information only when both legs were off the ground. By adopting a new visual feedback method, the camera now takes information at almost every point of the running process. In turn, this allows the bot to run for a longer time at a more forward-bend posture.

There are plans to include a body-mounted camera which removes the need for a separate camera to always watch over the ACHIRES. Be sure to check the Ishikawa Senoo Laboratory site to stay updated!