All the STEM news out of CES 2013 may have been tablets and 3D printing, but our eye is on the third generation of LEGO Mindstorm robotics as well. The new Mindstorm EV3 rolls in, firing balls of robot-educating awesome with a new programmable brick loaded with new features for today’s generation of tech-savvy kiddos and their parents. It’s available fall 2013, but you should start saving now while you gorge yourself with all the details here or… is it possible? Pre-order the kit? YES.

The Mindstorm Robotic kits are products that grew out of a 20-year collaboration between LEGO and MIT Media Labs, with the first Mindstorm kit based on MIT’s Programmable Brick technology launched in 1998. (See the LEGO Mindstorm timeline here. Thanks to LEGOEducationUK.) The current available kit is the 8547 LEGO Mindstorm NXT 2.0 available for $279.99. It’s full of fun in its own right with all the servos, sensors, motors and programming to push the limits of LEGO interaction.

The new version, however, brings a whole new world of play and programming possibilities to the table. The heart and brain of the EV3 is the all new EV3 Intelligent Brick. The brick is powered by an ARM 9 Processor running Linux OS, has 4 input and 4 output ports, 16 MB of Flash Memory, 64 MB RAM, an SD expansion slot and additional connectivity via a USB 2.0 Port, Bluetooth or Wi-Fi. The new 178 x 128 high resolution screen allows for graph reading, sensor data observation and direct programming through a folder-based file system and three-color, six button interface. On top of all that, there’s full support for iOS and Android devices with a free app available at launch so you’re able to control your robot from your very own handheld device.

The Core Mindstorm EV3 Kit ($339.95) comes with 594 Technic pieces and everything needed to create and program five different robots (12 additional robots by launch) guided by 3D building instructions on your iOS or Android device. Also available are the Intelligent Brick ($159.95), Expansion set ($99.95) and more, all of which can be pre-order through the LEGO Education site.

Update: Thanks to Justin Hoey for sharing in the comments that the 3D instructions will be powered by Autodesk Inventor Publisher. See screen grabs from the mobile app here.

Update: Thanks to Sketchfab also for sharing that they have some 3D views of the EV3 Mindstorm Robots and components on their site. See them all here.

This interview by TechCrunch with LEGO Mindstorm’s Global Project Lead, Camilla Bottke will give you a pretty good overview of what the new generation of Mindstorm can do. 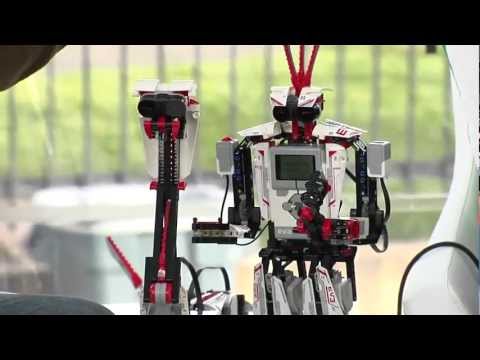 Cubify Introduces API and AppCreate platforms for Modelers and Developers