Open-Source Volumetric Display Pushes What is Possible With 3D Visualization

Technology keeps advancing, but not always in the way we predicted in the 90s. Volumetrics hopes to change that with the rollout of its open-source volumetric display design, which is not only the highest quality available, but also the most affordable to produce. But wait. What is a volumetric display?

Volumetric displays have been around for years, and for good reason. The devices make 3D graphics, a huge benefit for any concept that’s better understood in 3D versus 2D (e.g.: modeling, anatomy, animation, etc.). If they’ve been around for so long, you may be wondering why your college anatomy class didn’t use a volumetric display with 3D projection. Put simply, the technology has never been cheap. Until now.

Volumetrics, based in Berlin, wanted to make volumetrics more accessible, so they thought outside of the box. Instead of trying to create a projection technology capable of 3D graphics against a 2D screen, they created a 3D screen based on a double helix structure.

The helix is constructed using a 3D printer (the design for which is open source with full report available here). The helix is placed on a spinning stand at a specific angle to the projector. The projector emits a geometric image capable of having 3D properties given the natural shape of the helix, and as the screen rotates rapidly, the projected image becomes 3D.

Volumetrics isn’t the first company to attempt to make volumetric display devices more mainstream. They are, however, the first to do so affordably. The helix is made from regular 3d printing filament and the entire set up requires tools you probably already have at your maker station. If you aren’t that savvy, you can also buy one directly from Volumetrics for about $50. 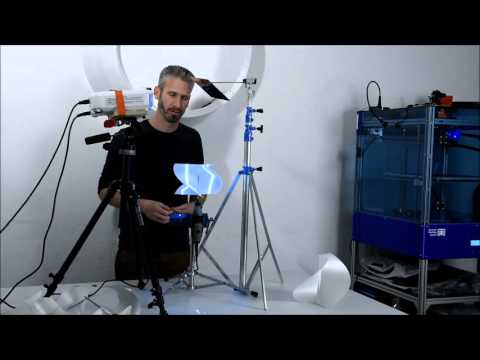 Cooler yet is the quality you get from the simple system. The image quality is one of the sharpest, highest resolution visual available, including full color. This is revolutionary. While the innovators have currently only projected geometric shapes, in the future this can be enhanced to enable the 3D display of any still image. This includes engineering models, anatomic structures for medical institutions and any other concept that is best learned with realistic projection or simulation.

In the future, it’s possible that the volumetric display could work for video. That’s a real work in progress, but the Volumetrics team called out technology innovators to help make volumetric displays mainstream. If the challenge calls your name, reach out to them here and join the movement to realize the long-time dream of pliable 3D visual displays.