Little by little augmented/mixed reality (AR/MR) is slipping past the surly bonds of consumption with more and more imagining, nay DEMONSTRATING, what 3D design could be like using devices that are, at least, sure to give us chuckles at the possibilities and, at most, completely take over our every waking hour.

Exanaview is a very, VERY basic modeling app with capabilities that include Constructive Solid Geometry (CSG) modeling, selection, highlighting, sectioning and measuring. However, it has one big feature no other 3D modeling app has yet to venture toward – 3D spatial authoring. In other words, real-time, 3D environmental modeling via a mixed reality headset (like the Microsoft HoloLens).

There’s no being completely closed off from your surroundings and there’s no QR code printing and moving either. In the Exanaview 3D spatial authoring demonstration, everything is dependent on the HoloLens spatial mapping capabilities. Here’s a brief demonstration showing passages being made inside a room through a series of clicks and selections. 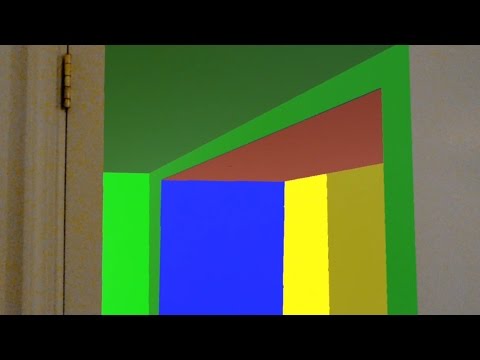 So, the video is enough to induce some tender-lovin’ vertigo, but you get the idea, and the ramifications for 3D authoring in industries from architectural/BIM and landscaping to product, aircraft, and automotive design is immense. As long as there is an area which can be accurately mapped, the potential is wide open. This could start with modeling up an engine from a physical chunk of stock material or remodeling a 100 year old structure.

Though the demonstration is given using the HoloLens, the plan is to expand the MR capabilities of the app along with providing support for other AR/MR devices, including Google Tango, Meta, Intel Project Alloy, Vrvana Totem, and Magic Leap.

We’ve seen some extremely cool modeling happening using Google Tiltbrush on the HTC Vive and Oculus Medium on the Rift, but this is the first convincing 3D authoring application that captures the basics of interacting with and digitally manipulating a physical environment. Take this to the next level and you’ve got full modeling capabilities with adaptive controls that both learn from your usage and adjust to environmental conditions.

If you’re up for it, here’s another video showing an engine example and edge selection.