I don’t know when you last played Super Mario Bros. 3 for 87 hours straight… what’s that? Last week? Well, after that you probably had that nightmare where you’re running through Mushroom Kingdom being repeatedly pummeled by massive concrete THWOMP blocks, right? No? Ok, just me. Still, those were one of my favorite obstacles and if you liked them too, then you’ll LOVE this week’s model.

Wes Swain has created a super-size, little THWOMP game console to house a Raspberry Pi (although I’m thinking that sizing it up a little to house the innards of a Super NES with a spot in the mouth to shove the cartridge would be AWESOME.) Why did he do it?

The notion of permanently sealing a functioning computer in a chunk of cement is compelling to me for some reason. This flies in the face of the modern notion of upgradability, patches, updates, & the unspoken reverence for a computer (even this cheap one) and I love that about this project.

WHAT A REBEL. We love that about you Wes.

Not only does this kick practicality in the face, it’s a project that incorporates electronics, 3D modeling, 3D printing, mold-making, and playing awesome, old school video games until someone gets really irritated with you. He has laid out all the step as an Instructable where he takes you through the modeling using Fusion 360, the printing using a LulzBot TAZ 5 and casting using Smooth-on mold-making products.

One thing to note. This is a single part mold with the Raspberry Pi EMBEDDED inside the THWOMP. You won’t be getting this out again… unless you turn invincible or have a Hammer Suit. SUPER MAAAAAARIO!! So, make sure you have everything loaded and connected up right. To protect it, he suggests using a few coats of liquid electrical tape. I’m thinking a two-part mold here and a cavity for the Raspberry Pi – I’m just not as rebellious as Wes is I guess 🙁

Have a look at how it came together in the video below, then double-jump over to Instructables for the walkthrough and Thingiverse to download the model! 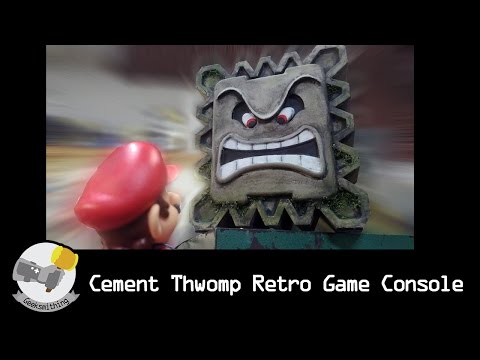