Remember those scenes in Star Wars where the Galactic Empire was huddled around a gigantic hologram table while plotting to kill Han Solo, Luke Skywalker, and their oversized rug companion, Chewbacca? How about the clips from Avengers where the team used a similar table to figure out the inner workings of an airship?

This is the experience Australian company Euclideon wants to bring next year with their holographic table. Just take a look at this video from gizmag: 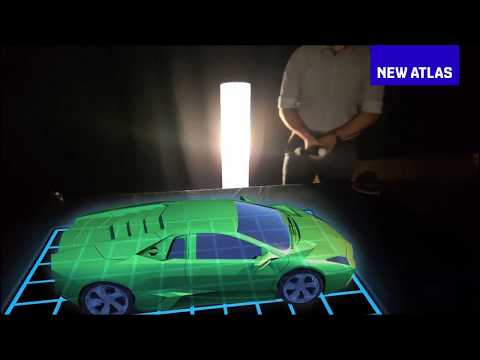 Based on their Unlimited Detail (UD) graphics engine, this holographic table doesn’t create one image to be viewed from different angles. Rather, using frequency separation crystal films, it generates eight individual images (one for each viewing eye) which can only be seen through the use of specialized eyewear.

The technology shown does away with bulky VR headsets that give you hat hair and strain your eyes. Instead, four people each put on a pair of motion-tracking glasses which process the light projections on the table and turn them into seemingly concrete objects–Think of them as a pair of 3D glasses which triangulates your location to generate an image which fits the angle you are looking at.

If you’re wondering if you can export your 3D designs and objects onto the table, the answer is yes; you totally can. The hologram table allows users to connect their network or external hard drives to the machine and load models from a variety of different software.

According to an interview between newsatlas.com and CEO Bruce Dell, the project seeks to make hologram technology more accessible and enjoyable for groups of people.

In case you didn’t know, holograms aren’t usually meant to be experienced together by multiple people around the hologram. The processing power required by the technology is so immense that, more often than not, only one person can indulge without the illusion breaking.

With the algorithm used in Euclideon’s hologram table, more images can be processed which allow more people to awe in wonder at things which are not really there. The table has already been used for a variety of applications such as city building and infrastructure, with plans for projects such as video games in the near future.

Euclideon presently has an initial prototype which measures 1.5 x 1.5 meters at a cost of $50,000-60,000 USD per table. This isn’t cheap by any stretch of the imagination, but considering the applications it implies, it may just be the next big thing since television and just think how it could be used in a product development scenario.

One questions though. Is it too little, too late with the wave of augmented reality software and devices on the horizon?

To see more of its features, check out the holographic table here on Euclideon’s website.

This New Apple ARKit Demo Unveils A Robot in Disguise