There are literally a ton of devices on the market aimed at recharging mobile devices with the most common being power banks or battery chargers. Others (and I’ve tried a few) rely on the elements such as solar chargers (Goal Zero), water-based chargers (Estream) and even open-flame cookware chargers (PowerPot). Most of those are great, but are useless if you don’t have access to the elements.

There are also body-motion kinetic energy chargers as well, such as Ampy and Sockett, but none are more unusual and perhaps more practical than HandEnergy–a ball-like device that converts hand motion into an electrical charge producing enough juice to charge a variety of mobile devices. More on this in a bit as the video warrants a viewing to get a better explanation of how it works: 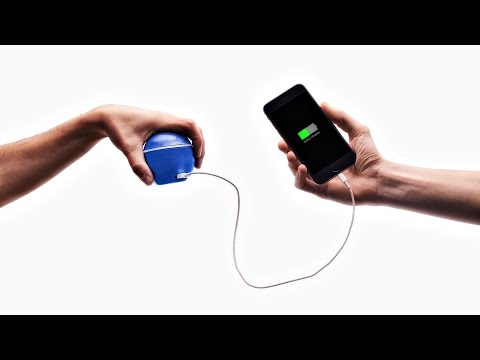 HandEnergy makes use of a spring-coiled rotor that’s engaged by twisting the rotation ring on the devices upper hemisphere. As the rotor spins, a pair of encompassing magnetic rings becomes electrically charged through the mechanical power, which is sent to a stator to produce a current and stores it in an onboard battery. Of course, in order to keep the spring-loaded rotor spinning an external gyration force is needed, hence the hand movement, which produces enough energy to keep the rotor spinning at an average speed of 5000 RPMs. Not too shabby.

As for the specs, HandEnergy is about as large as a tennis ball at a 2.8″ (72mm) diameter, has a USB output of 5V (1A), a battery capacity of 1000 mAh and an internal Bluetooth module that sends charging information to an included app that can be monitored on mobile devices. The HandEnergy charger was successfully crowd-funded on both Kickstarter and Indiegogo and those interested can pre-order for $69 (and up) to get their hands on one, which has a delivery date of May of this year.