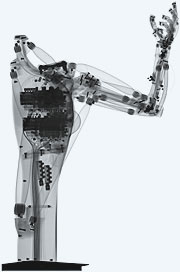 There’s nothing quite as cool sounding as Robotic or Bionic, unless you add Ninja on to the end. This Bionic arm developed by Festo AG brings us one step closer to something just like that.

Airic Smash Rock
Airics_arm is a bionic arm project initiated by Festo AG out of Germany. Their primary CAD package is Pro/E from what I can find. I know, but just because it’s not designed in SolidWorks, doesn’t mean it isn’t cool. Granted it would probably be a heck of a lot cooler if it had been. This is actually the representation of an actual human appendage I’ve seen. Wrap is with your off-the-shelf self healing synthetic fatty tissue and skin and you got yourself and sharp lookin’ arm.

Airic’s_arm is a robot arm with artificial bones and muscles. A total of 30 muscles move the bone structure which, as with our own arms, consists of ulna and radius, metacarpal and finger bones, a shoulder joint and a shoulder bone-joints that are otherwise not encountered in this world of technology. Airic’s bones have not grown of their own accord, nor do they automatically heal following a fracture. They were designed on computer and are grown in a three-dimensional polyamide structure using a state-of-the-art laser sintering process.

Festo actually has quite a few incredible initiatives that are part of their Bionic Learning Center including a Robotic Manta Ray and a Air Motion Simulator.

Not that fluid
While the arm is very authentic looking with the muscle and bone-like structure, it’s not as fluid as Dean Kamen’s Prosthetic. I think it will be, once they are able to control the compressed air that controls the Fluidic Muscle. Fine tuning dynamic motion, states of compression and responsive sensory adaptation with 72 different valves is going to take some fine-tuning. This gets really close. See the video here.

What do you like? Win a 4GB Flash Drive.

How SolidWorks Viral Marketing Ideas Could be More Effective 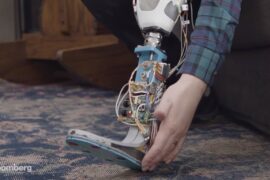