Last June 2017, Apple announced that it would be making headway in the Augmented Reality department with its new ARKit. Though they may be playing a wee amount of catch up with other AR platform initiatives such as Google Tango, ARKit is approaching it differently, aimed at augmenting your 3D space with a simple software update, a point and a tap to be transported into that immersive experience. The developer demos coming out are starting to show the possibilities for 3D modeling.

Osama Abdel-Karim, a developer of iOS/Mac apps and an expert on the subject, uses ARKit to create a 3D sketch and modeling tool which allows him to create objects using nothing but his fingers. 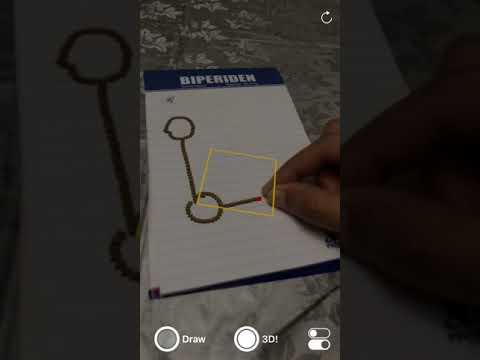 In the video published by UploadVR, Osama creates a simple drawing consisting of a series of circles connected by lines. This may seem like something any child could create in Windows Paint, but as the video progresses, he does the unthinkable…

Yes, he pulls it upward; extruding a 3D model of a miniature castle wall sketch he drew earlier.

The two main features of the ARKIt: camera location and horizontal plane detection, allow Osama to register his drawings as 3D virtual objects in 3D space. This allows him to place the objects on a horizontal surface.

Using a technique called Visual Inertial Odometry (VIO), camera frames work with motion sensors to determine where objects are on the 3D plane. Edges of objects like tables and chairs are detected by the camera so it can set its own location as well as the locations of other objects.

This edge recognition is what Osama uses to incorporate the tips of his fingers as a drawing tool. He developed the ARKit Swift code to show the iDevice how to recognize this and voila, his fingertips are now a glorified stylus! After this, it’s simply a matter of switching between drawing an object and manipulating its 3D model. This is done on the phone itself, as seen by the two modes “Draw” and “3D!”.

Apple’s ARKit is set to launch this fall, along with the new iOS 11. If you want to get more technical and see the code Osama used, you can find all the details on his toptal blog post.

Have you seen any other 3D/CAD related applications developed for ARKit? How do you think it competes with what’s possible with Tango?

Model of the Week: Modern, Low Poly Lamp Design [Light it Up!]