Along with a host of other announcements at Apple’s Spring Forward event earlier this month was the announcement of an entirely new keyboard and trackpad system that focuses on more intuitive experiences and further flexibility for control.

While the keyboard keys will provide a more touch-sensitive experience, the Force Touch upgrade on trackpads will offer a more intelligent input device that detects how hard a user is pressing – almost similar to how a Wacom tablet gauges pen pressure.

Even (arguably) small changes such as this can have drastic changes on user experiences when considering that app developers now have an entirely new set of options for how users interact with their software experiences. Apple has even setup an entire page of resources for developers that highlights everything that the new trackpad is capable of – so it’s clear that they have high hopes for what developers will come up with.

Among others who have already stepped up to the plate and are ready to play ball with the new trackpad is Ten One Design – makers of the popular Pogo collection of iPad styluses. Called Inklet, the $24.95 application is the first third-party application to support the new Force Touch trackpad and is designed for users to be able to use existing Pogo styluses with pressure-sensitive input capabilities directly on their Macbook with no other peripherals attached. 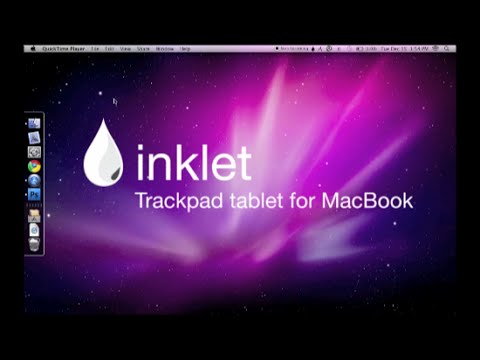 “Moving your Pogo lightly around the trackpad will allow the cursor to hover without inking. Increase pressure to draw; heavier pressure will result in a thicker stroke. Draw into any application that can accept pen input.”

The app also includes an advanced algorithm for palm rejection so that artists and designers can comfortably rest their palm on any other part of the trackpad while sketching on it.

For users who don’t already own a Pogo stylus, Inklet can also be bundled with one for just $34.90. For an additional $9.95 lumped on top of the $24.95 cost of entry, that’s quite a deal for new users. Of course, this likely isn’t going to come close to the power that a Wacom experience offers – however the ability to not have to carry any additional peripherals with an existing device that’s made to be portable does sound appealing for designers on-the-go.

It would have been nice if the demo video above showed some more advanced sketching, but we’ll just have to wait and see what early adopters can do with it.

Interested users can try a demo before purchasing over at Ten One Design.

Developing the Hackaball: An Interview with the Designers Behind the Kickstarter Hit

10 Resume Mistakes Term Paper Writing Services Can Save Students From