We stopped by Circuit Launch in Oakland, California to get a tour of this electronics hardware co-working space and its toys. They boast 31,000 square feet of space, mechanical and electronic prototyping tools, VR and mixed reality studios, educational opportunities and, at the time of our visit, about 80 members/quirky HW nerds.

If you want to see it all for yourself, you can “download your consciousness” into a mobile robot and tool around the space on a guided tour. It can all be done without physically traveling to the facility. In our video, CEO of Circuit Launch, Alex Dantas steers and speaks through the robot as an example. He also creeps on a bunch of members which I guess you could do, too. COO of Circuit Launch, Dan O’Mara is our tour guide and robot chaperone/wrangler.

Circuit Launch is found less than 2 miles from the Oakland International Airport. Go southwest and you’re in Silicon Valley. Go northwest and you’re in San Francisco. They’re also sitting in the midst of lots of industrial facilities that do things a HW startup would be wise to outsource. Oakland and nearby San Leandro are home to providers of things like: sheet metal, CNC machining, powder coating, and more.

At the time of this tour, Dan O’Mara tells me their approximately 80 members can be found here at any hour. Occupancy is spread out throughout the day at this 24-hour facility. And why wouldn’t it be? One of the best parts of not working at a corporation is being able to work at times that work best for you. At Circuit Launch, it’s just like being in your parents’ basement, but classier, and with better toys, and with friends there.

See this video for the full tour: 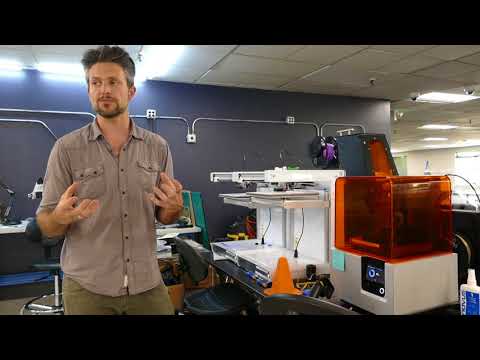 Upon entering, we were greeted by a robot museum courtesy of Joanne Pransky, The World’s First Robot Psychiatrist. She doesn’t have any patients yet, but Dan tells us AI should get to the point where robots need therapy any day now.

The first victim, er, member we creeped out was Andra Keay, Managing Director of Silicon Valley Robotics, or “SVR”. SVR is one of Circuit Launch’s key tenents, and Andra also serves as an advisor to Circuit Launch.

SVR supports robotics innovation and commercialization in a variety of ways. One way is their affiliation with Robotics Hub, an early stage VC fund supporting development in robotics, AI, AR/VR, and quantum startups.

Andra also showed us the “Magni” robot base made by Ubiquity Robotics. If you’re building a robot and want to give it long-range mobility, why reinvent that wheel? The Magni lets you plop your design onto their already-built robot wheelchair. Then you just worry about building the functionality specific to your invention.

The one we saw could support up to 100 kg. That’s equivalent to the weight of 4, maybe 5 small children. What you do with that information is on you.

Next, we stopped by Solid State Printers (referred to by their former name, 3DKustomz, in the video). The 3D printer manufacturer, Type A Machines, sadly closed down at the beginning of this year. Their technology, however, lives on with Type A’s former employee, Brandon Toomey, at Solid State Printers. They can repair your Type A Machine Series 1 Pro printer or 3D print your parts themselves. Classes on 3D printing are also available.

Dan tells us having these guys in their space is a great bonus for other members. If members need a slew of parts 3D printed, they can just walk down the hall and have Solid State Printers do it for them, right there.

On the 2nd floor, you find the equipment that isn’t obnoxiously noisy. That’s because this is where all the desk and lounge spaces are, and they thought this whole HW-co-working-facility thing through…

Coverage of the upstairs tools picks up here:

Laser Cutter – 4’x3′ with pass through

This is also where we ran into Jamie Greene on the laser cutter. He’s from Biomorphics where he creates “sacred geometry” art pieces.

Right now, there are a variety of targeted classes available on getting proficient at using specific machines or for specific skills. These course topics include things like IoT, robotics, and laser cutting. Plus, one of the members is a SolidWorks trainer.

Circuit Launch plans to add to their educational offering with “unstructured learning” opportunities, too. These would be things like mentorship and business classes. There’s also a corporate lawyer that comes in to teach about trademarks, patents, contracts, IP protection, etc.

You can view their currently scheduled classes HERE.

On our tour, we got to see Shuang (aka SwanVR) creating a wild video with mixed reality to help show “virgin burners” around Burning Man 2018. You can check out the finished product now on her Facebook page: https://www.facebook.com/swanvrart/

We also heard from Micah Zayner of VR Kiosk/Artists are Scientists. One of the things on his project roadmap includes creating a method to make VR videos sans green screen using depth sensors.

Neilda Pacquing told us about the VR app she works on supported by Oculus Launch Pad to teach women self-defense: EmpowHER VR.

To cut to the mixed reality studio part of the tour, watch here:

Next, we met Eric Bennett, CTO of Frontier Bio. They’re working on increasing bioprinting resolution (nanoscale and microscale) and ways to do it without killing cells.

Jump to this part of the tour to see the fabrication lab:

The noisier and bigger tools are kept downstairs, so the upstairs desk areas aren’t disrupted.

Here is also where we met Art Schulenburger and Jim Aldridge with Optics Central. They’re building a device for the direct air capture of C02 for the HCA (Healthy Climate Alliance).

Storage cabinets which can go right on desks are offered. If you rent a dedicated desk it comes with an RFID locker. You can also put whatever you want on top of and underneath a dedicated desk.

How Will They Survive?

We sat down with COO Dan O’Mara to learn more about Circuit Launch’s game plan. Considering the demise of similar spaces in recent years, I had to wonder what they intend to do differently.

Listen to the interview starting here:

Reasonable Rent for both members and Circuit Launch

Another key is NOT buying ALL the equipment — just what’s needed most by a specific niche of electrical HW entrepreneurs. Dan O’Mara cited the Buying-All-the-Things fault of other maker/coworking spaces as one of their major downfalls.

These guys do a lot of things themselves from the painting to going to China to shop for the cheapest possible carpeting when affordable stuff was unavailable in the USA. Just as they advise their startup members, they are extremely judicious about what they do themselves and what they outsource. And they’re not afraid to roll up their sleeves.

Come and Eat So Much Brazilian BBQ You Get Sick

On the last Friday of every month, you can stop by for gratis Brazilian BBQ, even if you’re not a member. It’s cooked up by Circuit Launch’s Brazilian CEO, Alex Dantas. (So you know it’s legit.) And since Silicon Valley Robotics joining the space, the BBQ event joined up with SVR’s Bots and Beers (a MeetUp for robot nerds that like to drink — I may have attended once.) The combo BBQ-beer-robot nerdstravaganza is now called “Bots & BBQ“. (Although the beer may have changed to caipirinhas.)

Take a Robot Tour Yourself!

You can set up a time to have Dan O’Mara show you around without ever traveling to Oakland. Just contact Circuit Launch through their website to request to download yourself into a robot!