Zippable is a novel approach to make most any stuffable, huggable 3D fabric-based shape you can think of. As the name suggests, a zipper is used as the closure system. But what’s really cool about Zippables is the super long spiraling zippers. The spiraling motion as the zipper is closed, magically transforms a twisty, curvy 2D flat pattern into a functional 3D shape! Because these shapes are fabric and the zippers can be easily reopened, you can make anything from a storage bag to a huggable stuffed pillow. If you’ve fancied owning a kitty shaped duffle bag or a starfish backpack, then Zippable is the answer!

Zippable is the brain-child of a trio of Computer Scientists from the Interactive Geometry Lab at ETH Zurich Switzerland. They are using computational shape modeling (CSM) to analyze and manipulation 3D mesh models. Their aim is to improve the fabrication and manufacturing of typically sewn-goods. They’ve come up with a spiffy algorithm that converts the mesh into a spiral-based developable surface that when flattened becomes the 2D pattern needed to make the softgoods. The problem statement that kicked-off their research and development efforts were as follows.

Fabrication from developable parts is the basis for arts such as papercraft and needlework, as well as modern architecture and CAD in general, and it has inspired much research. We observe that the assembly of complex 3D shapes created by existing methods often requires first fabricating many small parts and then carefully following instructions to assemble them together. Despite its significance, this error prone and tedious process is generally neglected in the discussion. We present the concept of zippables — single, two dimensional, branching, ribbon-like pieces of fabric that can be quickly zipped up without any instructions to form 3D objects. – Zippable Team

Have a look at the video then jump to the bottom of the post for a quick look at the workflow. 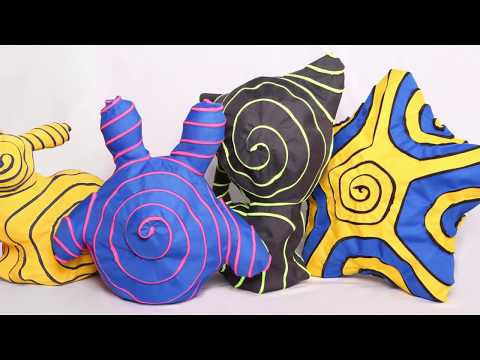 Zippables are objects which are made from a flat piece of fabric with a single zipper band attached around its boundary. Zipping them up creates surprising 3d shapes. In this video, we present a method to design and fabricate zippables for a wide range of target shapes.

Being a lover of all things 3D both digital and analog, I’m intrigued by the process. The diagram below depicting the workflow from 3D mesh model to 3D fabricated softgoods.

STEP 1 –  Design a single spiraling zipper curve on the surface of the desired shape.

STEP 3 – Compute the offset required to incorporate a zipper and to account for its resistance to out-of-plane bending.

STEP 4 – Generate the flat zippable shape by unfolding the developable surface onto a 2D plane.

STEP 5 – Transfer the 2D pattern onto the desired fabric and cut out pieces. CNC laser cutting is the target mfg. process.

STEP 6 – The resulting pieces are sewn together to create one inter-connected pattern shape.

STEP 7 – are cut they can be sewn together and the zipper-band attached along the perimeter of the fabric pieces using adhesive and/or sewing.

STEP 8 – Insert both the pattern and zipper into a custom-made jig that holds the zipper in place during the gluing process.

The bunny showed in the video was fabricated in five hours using the prototype cutting jigs. Once ready it took a mere two minutes to zip into shape! If you happen to be attending Siggraph 2018 the team from the Interactive Geometry Lab will be presenting several session. If you want to know when Zippable software is shipping sign up for updates here.

Everyday Hacks You Can Do With Your Heat Gun

Hedgehog Hollow Shows How to Use Heat Gun in Craft-Making

Fun Things You Can Do With Heat Gun