You can see them in almost every appliance you own. No, I’m not talking about buttons or switches; I’m talking about those two holes in your electrical plugs. Well, what are those for? I bet you’re thinking that they must have some specific purposes, right?

The guy behind Silver Cymbal is just as curious as you when it comes to this matter. So to address this mental splinter, he did a little digging: 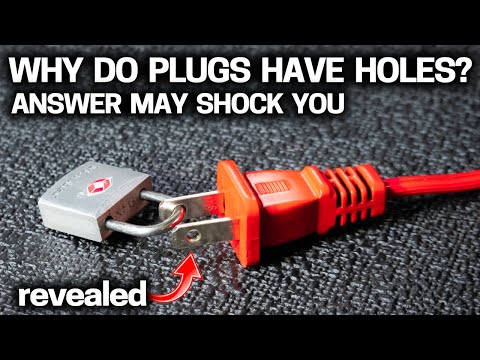 After inspecting multiple appliances throughout the 1900s including a waffle iron from the 60s, he decided to do a little research. His quest for knowledge led him to June 17, 1913, where American inventor Harvey Hubbell patented the first electrical plug in the United States.

Contrary to what you might think, Hubbell’s design featured no holes. Quite the opposite, in fact. Rather than having deliberate gaps in the middle of the metal, the design used to feature semi-circular indents on either side of the plug. These indents were designed to hook the plug to the socket and prevent it from falling out.

Here’s where it gets weird. Since the plug was so iconic, other people tried to modify Hubbell’s design and make it their own. To this end, several types of plugs were made. You had plugs with square holes, round holes, but none of them dared to copy Hubbell’s semi-circular indents for fear of getting sued.

Hubbell sued them anyway. While he lost the case, this caused the higher ups to determine that there needed to be a single, universal plug design in the U.S.

And so all the designs converged, Hubbell’s included. This resulted in an electrical plug sporting holes in the middle and Hubbell’s semi-circular indents on the sides.

But that still doesn’t answer the question of why the holes are in there in the first place.

If you look at electrical sockets today, none of them features any grooves which take advantage of the standard electrical plug’s design. Moreover, there is nothing that fits into the holes of the electrical plug.

There are tons of myths about these holes:

Some surmise that the holes were made to fit an electrical lockout. But seeing that lockouts were first introduced in the 50s, 40 years after the first electrical plug was introduced, this doesn’t seem to be the case.

Another farfetched explanation is that the excess metals from the holes were used to support the war effort. This is likely to be false as well, seeing that the Second World War wouldn’t start until 1939.

But back to facts. According to the American National Standards Institute (ANSI), there is no rule regarding the implementation of holes in today’s electrical plugs. This is weird, considering the holes played a big factor in standardizing the U.S. electrical plug back in the day.

So the short answer is: these holes do nothing. Absolutely nothing. Since production companies save on metal by not filling in these holes, they would much rather make hole-riddled plugs. And since people nowadays expect to see their plugs with holes, that saves them and the world a ton of trouble.