Building an underground hideout and pool with nothing but bare hands. Well, that’s not entirely true – they actually employ the use of some handy machete-like tools, as well. Nevertheless, these three men from the YouTube channel The Survival get their kicks from building astounding structures using nothing but the environment, their creativity, and their own two hands.

For this particular project, they dig themselves their own underground hideaway – complete with underground slide and pool: 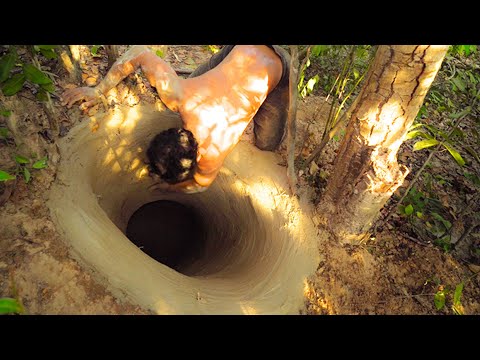 It All Starts With A Hole…

As with most of their underground builds, these men start by digging a giant hole in the middle of nowhere. As the duo reach their intended depth, they begin to carve out the different features of the hideout.

It’s amazing how they manage to carve out the two benches, a round table, and an entrance to the pool area without any measuring tools (at least, none that we can see). They most likely make blueprints for what they have in mind prior to the building process but if the video is to be believed, they eyeball everything in their minds and make markings with their tools as they dig along.

Carving Out The Swimming Pool

Once the initial hole and features are done, they begin to carve into the hard rock and ground to create a swimming pool. Using the entrance they have made as a point of reference, they painstakingly dig out a hole big enough for two as well as some extra swimming space.

When the enclosure is big enough, one guy continues work on the pool area while the other goes above ground. What they do next is something straight out of Minecraft: using nothing but their eyes, they estimate the topography of the land and dig a hole leading directly downwards to the pool. They make it look easy, but this involves a lot of guesswork without the proper tools or measuring equipment. With enough digging, the two ends meet, and the duo resume carving the finer details of their hideout.

Making clay by mixing some ground they have found nearby and some water, they line the walls of the pool and the slide to make them smooth and easier on the skin (no one likes to slide down a rough slide, after all). They use a different kind of clay to line the benches and candle crevices they have made to give them a bit of color before moving on to one of the most important parts of the project…

Filling The Pool With Water

Seeing as they want to keep things as natural as possible, the duo can’t just grab a hose and fill their pool from a nearby home or fire truck. Instead, they opt to use Mother Nature’s natural moving bodies of water to do the job for them.

By connecting a string of hollow bamboo poles and dipping one end into a nearby stream, they funnel natural running water into their manmade pool. Filling any pool takes a lot of time but since they can’t control the flow of water, the two take a short break before continuing with their work.

Until now, the duo could only get into the underground hideout by entering the first hole they have made. In order to make access easier and well-hidden, they have carved out a staircase leading to the rest area using their trademark tools. They then line the entrance with some candle crevices and fill those with clay to make finding the entrance much easier.

The two make their hideout really hidden by adding a roof to their rest area. Using long wooden sticks and hay as a base, they cover the roof with the ground they have dug up and then harden it with another type of clay. Finally, the whole thing is covered in another layer of ground and leaves to make it blend with the environment.

Time To Relax and Enjoy Your Work

Light up some bamboo candles, place them on the crevices, and you have yourself a hideout which looks more like a spa than an underground cave. Then, you can take the slide down into the pool or take a break on one of the benches once you’ve had a nice dip.

Thanks to the hardened clay, sliding into the pool doesn’t seem as rough on the skin as sliding down a rocky surface. The whole hideout definitely has a relaxing vibe, and you wouldn’t mind taking a weekend off to take a retreat here, would you?

The Survival YouTube channel is full of manmade structures built using nothing but human hands and a couple of simple tools. Be sure to check it out for more natural architecture!

What I Learned From Interviewing 50 Senior Engineers