Only the most gullible of people would believe hypnosis works, but dang it anyways, it sure is alluring to see a bunch of swirls rotate in place. 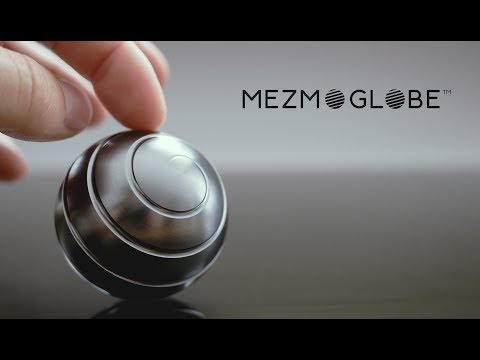 The Mezmoglobe is in no way a portable hypnosis apparatus. Composed of aerospace grade aluminum rods, these 54 mm spheres have stainless steel bearings inside them which allow them to spin indefinitely on their leather base. Combined with the engraved spiral on the outer shell, and you have the makings of a toy which will easily distract co-workers (or at least make them nauseous).

Getting the Mezmoglobe to work is as easy as spinning the sphere and watching the toy rotate. Depending on how hard you spin it, the rotations of the spirals will be as fast or as slow as you want them to be.

Mezmoglobes are CNC machined to give them a precise spherical shape before being anodized in different colors and given a smooth finish. The steel bearing is then added into the sphere before being covered by the leather base.

As you can tell by the dizzying amount of ways this thing can spin, the Mezmoglobe is pretty good at distracting you from more important matters. Though it is being marketed as a toy for creators, it’s hard to see any work getting done with this spinning sphere on your desk.

The Mezmoglobe’s Kickstarter campaign is already fully funded and currently stands at $297,146 out of its initial $3,968 goal. But don’t worry! You cans still preorder yours at, yep — its Kickstarter page.