Few things can drive a human being more than passion—but coffee might be one of them. For this reason, it makes great sense that people are passionate about coffee. Some of the innovations that have surfaced in the realm of kitchen gadgetry in recent years have been pretty profound, but the coffee maker itself seems to be one culinary contraption that still has room for improvement. Enter Bonaverde—a Berlin-based upstart on a mission to manufacture the world’s first true “all-in-one” coffee maker, capable of not just grinding and brewing, but roasting as well.

The underlying concept is simple, and undoubtedly, many have pondered it before: in order to achieve the freshest cup of coffee possible from a single machine, then you will need to have a single device capable of executing all three preparatory steps—roast, grind, brew. Bonaverde has taken a very unusual path toward tackling the task of creating the super-machine that can make this happen. The company has posted their coffee maker conundrum as a design challenge on Jovoto, an online creative incubator in which a public user community can collaborate to solve design dilemmas and pitch concepts. Currently, there are just under three days left in the challenge, the ultimate winner of which will receive €1,500 ($2,029 USD), plus a €0.80 royalty bonus on each machine sold after production has begun. Additional “Community Prizes” are also being awarded in monetary form—€1,000 for second place, €750 for third, €500 for fourth, and €250 for fifth-through-seventh places.

The November Seventh deadline for the competition is fast approaching and the challenge has attracted some quality talent from around the globe since its October Tenth opening. After the challenge closes, submissions will be considered during a seven-day review period, after which the winners will be announced. Once a final design has been chosen and solidified, Bonaverde plans to post the winning concept on kickstarter to crowd-source the funds necessary to actually put the device in action, and ultimately take it to market.

Thoughts on the Business Aspect

Paying upfront costs to attract talent on Jovoto and then transposing the biz to kickstarter is an interesting strategy, and it is certainly one which defines the current era of capitalizing on the benefits of social media. Establishing a dynamic personality for an upstart these days is becoming an increasingly critical step in the digital age, and it is an important one especially for companies that want to attract the attention of niche subcultures. Using social media as a lever to award your brand with cult fame seems to be a popular way of gaining appreciation for grassroots flavor, and more importantly, for attracting people who are not only willing to endorse a product, but the values of the entire company behind it. The coffee market is perfect for that—the past two decades have certainly made it obvious that folks are willing to pay a premium for an artisan-brewed cup of their favorite roast. As we have seen, being a Barista these days is not just a job, but an art form, lifestyle and career, all rolled into one.

At this point in the game, Bonaverde has produced 135 prototypes and has had over 15,000 people tasting the products that have percolated out of them. The challenge that the company has posted on Jovoto is mainly geared toward refining the aesthetic appearance of the device, whilst keeping the principal three-step process and relevant machinery in mind (and in one single sleek chassis). Essentially, it is a challenge in industrial design, or more pertinently, a test of the age-old balancing-act of form versus function.

Thus far, over ninety concepts have been uploaded to Bonaverde’s idea page on Jovoto. From an engineering perspective, many of the community submissions that have been posted do not seem terribly practical from an engineering standpoint, demonstrating a lack of consideration for fundamental areas concerning thermodynamic principles, durability, and design-for-manufacture. Nevertheless, the vast majority of the submissions are quite pretty in terms of aesthetics—which is to be expected in any competitive design challenge (and of course it was the main focus of this one).

Despite receiving a large number of submissions that are questionable in terms of commercial viability, there are a handful of really solid-looking proposals which seem entirely feasible to produce under the considerably-generous €100 max on the predicted cost-of-manufacture. My personal favorite is “Coffeebox” by Monstro. While my intuition tells me that the design will need a much taller top in order to house the roasting and grinding mechanisms (which will likely be gravity-fed to a certain extent), I think that Monstro’s concept is extraordinarily practical. It is one of few designs viewable which features an interior cavity large enough to house all of the essential components that will need to fit inside of it. Additionally, the Coffeebox has a very wide base, which is critical in any machine with multiple motors and mechanisms that function asynchronously in close quarters—they will resist each other and offset balance. Here is how I see it:

The roasting component is most likely to be horizontally-mounted, assuming that it functions like a typical roaster, which works like a cylindrical rock tumbler with a heating element underneath. The grinding component will almost certainly be vertically-mounted and gravity-fed, as are most automatic grinding devices for coffee beans, or otherwise. The brewing system will likely require a considerably large motor to actuate a pump mech that can direct the water flow from the reservoir through a heating system (unless the reservoir will be gravity-fed like a commercial BUNN® coffee maker, but none of the current designs exhibit features that imply the use of that technology).

Monstro’s design is one of only a few that takes these basics into consideration. CVAG’s Futura Bonaverde Coffee Machine is another, and was the winner of the “Early-Bird” challenge in the competition, after it was rated the best design to be submitted by October 30th, one week before the final deadline. While the specifics on the dimensions of many of the submissions are vague, both Monstro and CVAG went big (considering that a typical coffee mug is about five inches tall, which would make the two respective designs over 20” tall each—entirely necessary to house all of the innards). CVAG also did a cost analysis for their parts—props!

It Has Been Done Before 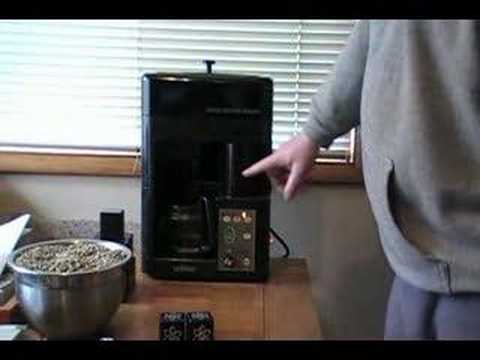 A great idea has been something to cherish for as long as humans have been able to think. But in a day and age where great minds are thinking alike more than ever, it is becoming increasingly difficult to capitalize on a thought before someone else does. Accordingly, it is also sometimes difficult to learn if someone else has defeated you in the race to the finish line. For that reason, it is often easier to innovate than it is to invent.

It is inarguable that Bonaverde has demonstrated strong will and passion for the creation of their full-cycle coffee machine concept. It will not be surprising if in five years’ time, the now small German upstart is a respected name amongst households that appreciate a fine brew. The company has clearly begun to pique the interest of their target audience, and has laid fantastic seeds for cornering a growing and evolving market of coffee aficionados. Alas, claiming Bonaverde’s prospective product to be the “World’s First Roast-Grind-Brew” coffee machine is an untrue statement.

Over a decade ago, a little-known company called “UNIMAX” produced an entire line of coffee machines which completed the three-step roasting, grinding and brewing trifecta from start-to-finish, just as Bonaverde intends to do. The UNIMAX brand offered a number of models including the 425si 551i, 555si, 585si and the 2000 “Micro” which all had the three-step process as their main selling-point. From my research, is not entirely clear to me why the company fell and remained under-the-radar during its years in operation, and concurrently, it is not clear to me why the UNIMAX brand ultimately dissolved. It could be that ordering unroasted, raw green coffee beans 10+ years ago was a hassle that even the most particular coffee enthusiasts were not willing to deal with.

There are a small number of avid at-home DIY coffee aficionados who hold their UNIMAX machines very dear to this day. Maybe that notion could imply great encouragement for Bonaverde’s revival of the old concept. Hopefully, for Bonaverde, there will not be any patent issues in the revival process.